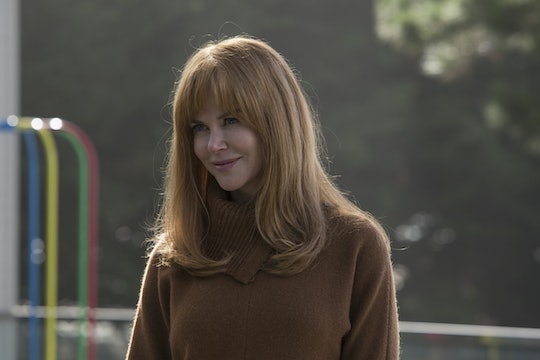 Celeste's Abuse On 'Big Little Lies' Mirrors My Own

Celeste Wright (played by Nicole Kidman) on Big Little Lies has had a dilemma throughout the HBO miniseries: whether or not to leave her physically abusive husband, Perry Wright (Alexander Skarsgård). The portrayal of an abusive relationship on Big Little Lies feels eerily similar to my own, sans the physical bruises and the sex that borders nonconsensual. (Because I refuse to let my husband touch me, sex has been off the table for a number of years.) Celeste and Perry spend the course of the HBO miniseries playing a game I am more than familiar with: the “good guy” versus “bad guy” game. Perry comes home early as a surprise: good guy. Perry strikes Celeste when she turns his advances down because she doesn’t want to be late for her friend’s show: bad guy. I constantly play every moment our two children spend with their father on repeat in my mind, wondering what type of memories their little brains will salvage. When my husband calls me ugly, tells me I looks like a man and that no one would ever want me: bad guy. When he cooks a wonderful meal and drops anything for the kids and they're happy and laughing: good guy. It’s so similar to “the good times” argument Celeste often gives to her therapist, Dr. Reisman — that feeling that the good times, the moments of laughter they share and the times they fall asleep in their father’s arms, will outweigh the yelling and name-calling. “He’s a very good father,” Celeste has said on more than one occasion of Perry. Well, so is my husband. A very attentive and caring father, who also happens to be abusive.

It’s devastating to imagine the quick turns this type of relationship can take. But this is a reality for so many affected by domestic violence. Although my husband has not hit me, the abuse he inflicts on my everyday life has been equally as traumatic: he employs economic control, isolation, threats, blaming, emotional abuse, and intimidation tactics on every facet of my life. Sometimes I fear that what’s going on is only happening in my head, especially when I watch him teach our children the alphabet, a math skill, or the days of the week. Could it work? I wonder. Maybe we could live in separate rooms? Date other people and still both be there for the kids? We’re not good as a married couple, but maybe could we be friends?

I made so many excuses for his behavior even after I realized that being around me brought out the very worst in him.

Like many survivors and victims of domestic violence, I want the abuse (and the marriage, in my case) to end. However, I don’t want this to end our relationship, which is, above all, about my desire to successfully co-parent our children more than anything else. And when I think about my children, I start to feel guilty about leaving. I second-guess whether or not this is all happening in my head, or if what’s going on is really that bad. I mean, what kind of parent threatens their child’s relationship with their father? What kind of parent breaks up a perfectly good home? Celeste considers those the same concerns until Perry threatens to kill her — and means it.

When my husband and I were first married, I started skipping out on get-togethers with my girlfriends because I knew he’d be waiting at home with the silent treatment, mad I’d gone out without him. I made so many excuses for his behavior even after I realized that being around me brought out the very worst in him. In fact, I didn't really tell many people that we had gotten married until after I was pregnant with our first child. And though my body doesn’t bear the same physical scars to match Celeste’s abuse on Big Little Lies, I am home to a different kind of pain. Either I make the coffee “wrong,” or season the food “the wrong way,” or buy something I liked at the grocery story and forget what he wanted, or ask for a grocery list when he says it should all be in my mind. Lately, it’s because I stand up for myself and finally say what’s on my mind.

Whenever Perry walks in the room I cringe, uneasy every time he puts his hands on Celeste. His touch, which often begins in a loving way, quickly moves from pleasure to a twisted game where pain dances around pleasure. The visceral reaction I have to Perry is the same way I feel whenever my husband walks near me or comes up the stairs. Will he make a comment about the kids, the house, something I posted on Facebook, or mutter something under his breath about a past argument? What comes out of his mouth is often unpredictable, so I spend the hours we are home together avoiding him as much as possible.

My heart both soared and sank during the penultimate episode of Big Little Lies when Celeste finally reached her breaking point after a fight with Perry left him threatening to kill her. Following the fight, Dr. Reisman urged Celeste to reveal the extent of the abuse, both to herself and to a friend. Reisman warns that men like Perry will use her silence against her in court — If things were so bad, they’ll ask, why didn’t you tell anyone? And then something clicks. Celeste, who has spent the entirety of the series covering up bruises and saying that her children are blissfully unaware of anything but a happy marriage, realizes that covering for Perry won’t just hurt her in the long run, it’ll hurt their twin sons. Unfortunately, my kids don’t share that same blissful ignorance. They’re not accustomed to peaceful interactions between their parents — their lives revolve around their fear. Any raised tone from either of us, especially their father, could spell trouble.

I watched, rooting for Celeste, desperately wishing I had the options she does. But I can’t. I don’t. I have no steady income. Saving money or moving things with my own car are nearly impossible. The little money I do make on my own wouldn’t come anywhere close to being enough.

In the past, my 3 year old has told strangers about how his “daddy always yells at mommy.” In those moments, I’m thrust back into the reality of our situation. I can’t pretend what’s happening isn’t real — not for me, and not for my kids. I can’t pretend that the things they see and hear in our home won’t affect us all for life.

I do my best to survive. To live.

Even as I write this, I want nothing more than to casually search for apartments or houses I could afford in the same area so that my kids could stay in their current school. I watched, rooting for Celeste, desperately wishing I had the options she does. But I can’t. I don’t. I have no steady income. Saving money or moving things with my own car are nearly impossible. The little money I do make on my own wouldn’t come anywhere close to being enough. I even applied for food stamps through the Supplemental Nutrition Assistance Program (S.N.A.P), but was denied. I couldn’t even get most of the documents together for my S.N.A.P application because we no longer have a joint account and all the bills, though many are in my name, are still paid from his income. My bank statements reveal negative balance after negative balance. Two have been closed in the last six months. I have a tremendous amount of debt and a credit rating in the garbage. Our income on paper, unless separated or divorced, is too high.

So instead, I sit here, still shaking from the package of meat he threw at me that hit my 3 year old instead. I do my best to survive. To live.

“Get your new life ready,” Dr. Resiman told Celeste. I wrote down her instructions as if they were my own: find an apartment, furnish it, pack the bags, be ready to go.