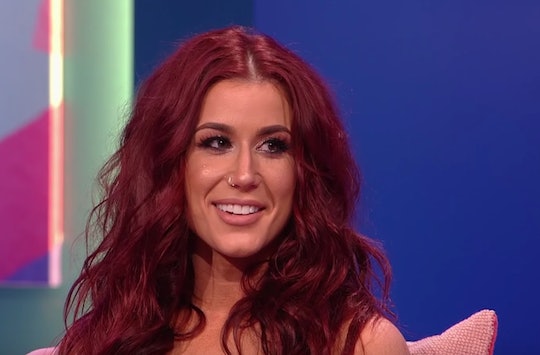 The moment Teen Mom 2 fans have been waiting for all year is finally here. For months, fans have known that Chelsea Houska had been expecting a baby girl with her husband, Cole DeBoer — and on Wednesday, Houska finally gave birth to her third child. On the same day, Houska posted her first baby photo of her daughter and the picture is absolutely adorable.

Houska gave birth to her daughter, Layne, on the morning of Aug. 29, according to In Touch Weekly — and Houska's announcement of her daughter's birth was sweet and simple. If you weren't aware that Houska was pregnant, then her Instagram post would have been very confusing — because she doesn't state that she actually gave birth. In the picture, her daughter can be seen wearing the cutest hat, simple white onesie, and looks so peaceful to be here.

"Happy birthday to YOU, sweet baby Layne," Houska captioned the super adorable photo of her daughter, Layne Ettie, whose middle name she revealed in the comments. But that is all she said about her. Fans have no clue how much she weighs, or how Houska's labor and delivery went. But one thing is certain — baby Layne is finally here. And people couldn't be more thrilled.

Fans (and Houska's Teen Mom 2 cast mates) took to the comments of the photo, shortly after she posted it, to share their well wishes and compliment her about the baby's birth. Seriously, she is gorgeous.

"Congrats she looks like her brother," a commenter stated.

Now that Layne is finally here, she will have the opportunity to meet her big brother, 1-year-old Watson (who fans are already comparing her to), and her big sister, 8-year-old daughter, Aubree, according to E! News. Given that fans Houska's journey from teen mom of one to mom of three on 16 & Pregnant and Teen Mom 2, it's awesome to see her add a new addition to her family with her third child.

Layne's arrival could not come at a better time — she was born on Houska's birthday, according to MTV. And her birth is one birthday present to Houska that really can't be topped.

Fans know that Houska has been waiting for Layne to arrive for a while. Houska took to Twitter throughout her last trimester to update her fans about the fact that she was so ready for her daughter's arrival. Just days before Layne's birth, Houska was tweeting that she was over her daughter's kicks to her ribs, had a plan in case she went into labor in public, and had been feeling like she was pregnant all year.

And because Houska was so ready for her pregnancy to be over, this probably makes Layne's arrival (and birthday present) so much sweeter for her.

Now that Layne is finally here, fans can hopefully look forward to more super cute photos like the one that Houska posted today in honor of her daughter's birth.