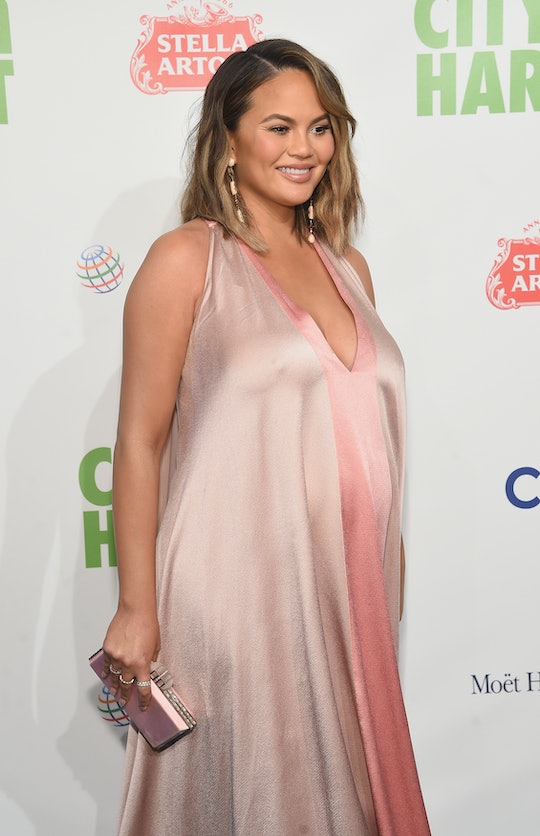 Welcoming a second child can certainly make things harder around the house — double the trouble, as they say. But on the other hand, there are aspects of having a second child that are way easier than your first. For example, most new parents take the opportunity to reuse items their older kid has already outgrown — and celebs are no exception. For example, Chrissy Teigen shared how she's preparing for her baby's arrival in a recent interview, and she revealed that her daughter, Luna, will be passing down plenty of items to her new younger brother, who is due in June.

On Tuesday, Teigen and her husband, John Legend, discussed the topic at Harvest's 35th Anniversary Gala in New York City with Entertainment Tonight. "We're kind of just using Luna's old things," Teigen said jokingly, according to Entertainment Tonight. "It will be fine." The couple also added that when it comes to toys, their son would simply be getting Luna's "hand-me-downs."

Teigen and Legend could easily afford to buy all new items for their upcoming bundle of joy, so it's awesome that they're opting to use what they have and save money, like many other parents do. After all, babies outgrow clothes extremely quickly, so most of Luna's baby outfits and toys are probably still in great condition.

When asked about how soon-to-be big sister Luna is getting ready for the new baby, Legend and Teigen explained that she is a little out of the loop on things, despite their best efforts. "She knows just as much as she knew eight months ago, which is nothing," Teigen told Entertainment Tonight. "So it's going to be a surprise." Legend added, "She knows to call it a 'baby,' but I don't know if she [can] clarify what that really means to her yet."

Luna only just tuned 2 years old, so it's understandable that she doesn't quite understand what's about to happen to her family — but it's not like her mom hasn't tried to teach her. In fact, last week, Teigen had to go to the doctor for a fetal nonstress test, and she brought Luna along. Luna clearly had no idea what was happening to her mom's belly, as evidenced by the hilariously adorable video Teigen shared on Twitter.

In the short clip, Teigen's abdomen is outfitted with monitor belts (which is how the test is performed, according to the Mayo Clinic), and Luna climbs up onto the chair by using her mom's bump for support. Whoops!

The hilarious challenges of having to balance her toddler with her pregnancy don't bother Teigen though. In fact, carrying and raising Luna seems to have given her increased confidence and comfort with her second pregnancy. In a recent interview with Romper, Teigen said:

I let myself go a little bit more with the second one ... Because I'm just so comfortable with being a mom now. I trust that everything is going to be OK. I'm able to predict things a little more.

Teigen also opened up about mentally preparing to experience postpartum depression (PPD) after delivering her son. She struggled with PPD after giving birth to Luna, as she first shared in an essay for Glamour, and she was previously scared that she'd have to deal with PPD again after her second pregnancy. But now, she's not afraid anymore. She told Romper:

Honestly, it's not a fear of mine anymore ... because of all the help I get. I feel like, now, as soon as I get that first sense, I'm really going to know, "OK, this is it." It's almost like when you're in a nightmare and you can tell yourself "this is a dream, this is a dream, this is a dream" and it's easier to get through it. I think I'm going to have that, John is going to be more vocal, and hopefully everyone around me will be able to call me out on it this time around.

It's clear that the Legend-Teigen family is more than prepared to welcome its newest member and the world can't wait for their adorable updates on their little boy.