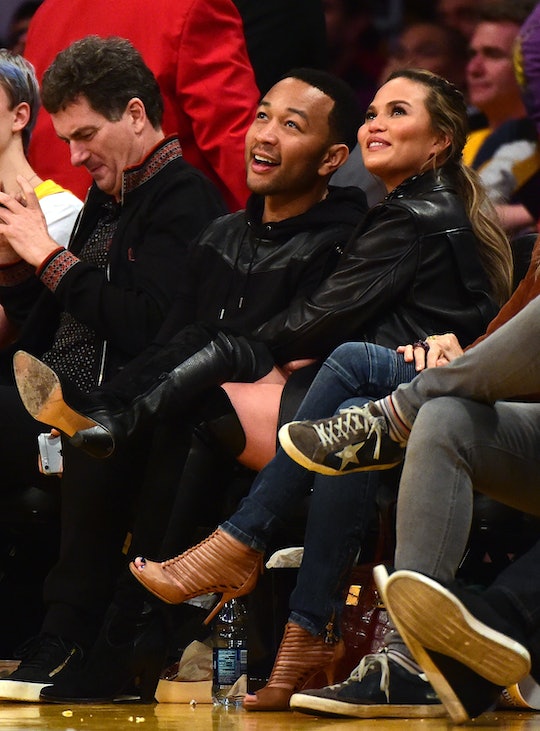 When Chrissy Teigen and John Legend announced they were having a baby, a few things were pretty certain. First, it would be a very good looking baby. Second, it would have great taste in music; and third, it would be instant social media royalty. Turns out, since Luna was born back in April, all of those things have come true — especially the part about music. Chrissy Teigen's newest Luna photo shows the little one is a fan of dad's music.

This week Teigen posted an adorable photo of her Grammy-award winning husband holding little Luna. She looks very content resting on her dad's chest, and even has her thumb in her mouth. Teigen captioned the photo, "Listening to daddy's new album," and finished it off with a heart emoji (which seems like an understatement here — cuteness overload). The captured moment is incredibly sweet and intimate, and definitely shows the upsides of living with a music, um, Legend.

Of course, Teigen is known for joking with her husband as much as anything. She might be making a subtle jab that the new record puts people to sleep, but given Legend's track record, it's probably just a smooth, relaxing, even transcendent, album. Anyway, if your record puts babies to sleep, that's probably a compliment.

Apparently, Legend has been getting a lot of practice creating music for a younger audience since he's jumped full-force into his new role as dad. In a recent interview with People, Teigen said that he's picked up the slack when it comes to the "diaper change" because "it's so new and fun for us." (We'll see how long that lasts...) But, in the music department, he hasn't been so stellar. Surprisingly, Teigen joked that his lullaby skills are "pretty questionable." She said, "he doesn’t really know how to sing to babies … [The] bath time song wasn’t so good, I will say, last night, it was like, ‘You’re taking a bath time.’ Like, there was just no thought into it.”

Of course, it takes time to develop a sophisticated style, so maybe Legend is still finding his voice as a baby-musician. He's got being a musician for adults pretty much covered, so maybe this is the next big challenge of his career. Or maybe he's just like every other dad, trying to get their babies to take baths and singing whatever comes to mind first. Either way, it's pretty cute. Luna is a lucky gal.