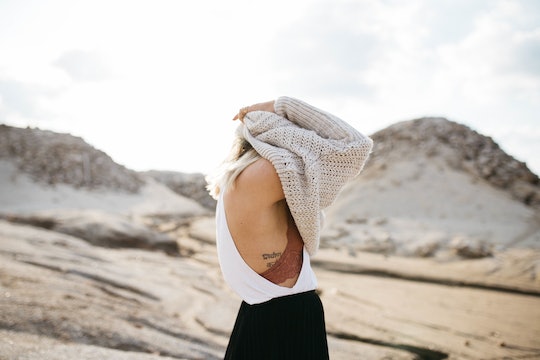 City In Maryland Passes Female Topless Ban To "Protect" Others

"Ocean City is not a topless beach and will not become a topless beach." That's the way a city in Maryland that passed a topless ban for women to "protect" families announced the news, in an emergency city council meeting, over the weekend. In the press release, the mayor of the "family resort," Rick Meehan, was emphatic that the city and popular East Coast vacation destination "do whatever is within our ability to also protect the rights of those families that visit us each year." In this case, that means fining women, and only women, $1,000 if they're caught baring their breasts on the public beach — or anywhere else in town, for that matter. Because families.

It's true that Ocean City, Maryland, a prime senior trip destination for just-graduated high schoolers as well as families with toddlers, has never had a reputation as a topless beach. But word started to spread that times were a-changin' after the Ocean City Beach Patrol issued a memo Tuesday instructing its lifeguards not to reprimand female beach-goers going bare from the waist up, according to CNN. The intention was to shift this responsibility to local law enforcement after a "top free" activist named Chelsea Covington asked the Worcester County state's attorney's office for an official opinion on the issue.

But some took the change to mean that top-free was now an option for women.

Because he decided upon review that the current indecent exposure law is "unclear," Worcester County State’s Attorney Beau Oglesby has requested that the Maryland attorney general's office issue an opinion, HuffPost reported. While anxiously waiting for the decree to come down in the meantime, officials at the city level scrambled to protect the sanctity of its beaches from the glare of the female nipple by passing the emergency ordinance. Specifically, it ensures that anyone who shows "the female breast with less than a fully opaque covering" will have to cough up the $1,000 in fine money for their sins.

The ordinance does not prohibit women from breastfeeding in public, Councilman Wayne Hartman told PennLive, but full exposure is off-limits. (Um, OK.)

You have to understand though, that this is for the families, and human decency, too. "Each year thousands of families visit our beach to relax in an atmosphere free of this type of activity," Meehan said, according to PennLive. "We respect their rights."

Phew. Families can really breathe a sigh of relief, now that the female nipple has been safely caged away once again.