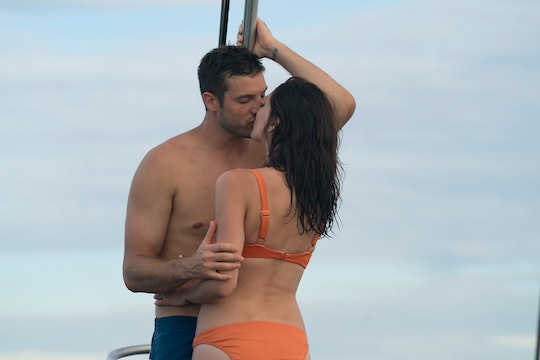 With so little time on The Bachelorette to go, fans may be getting antsy waiting to find out who wins. Here are some clues that Garrett wins The Bachelorette, because he and Blake both seem to have a pretty equal chance.

This is all just speculation at this point. This season is especially difficult because Becca seems very much into both Garrett and Blake. Furthermore, because this season happened right after Arie's season, I think fans don't trust the lead as much as they used to. Becca said she falls in love with two men this season (Garrett and Blake), which is exactly happened with her and Arie. I feel like this makes her decision so much harder.

"I did develop really strong feelings for a couple of them and I did fall for two guys at the end, yes," Becca told Entertainment Tonight. "I wanted to go through the entire season doing me, and treating these guys with respect. So I will say that I tried to do that the entire journey." So far she hasn't told either Blake or Garrett how she feels about them, but fans are still biting their nails with anxiety. Could Bachelor Nation be in for another crushing Peter Kraus situation?

Well, with that being said, here are the clues Garrett comes out on top: