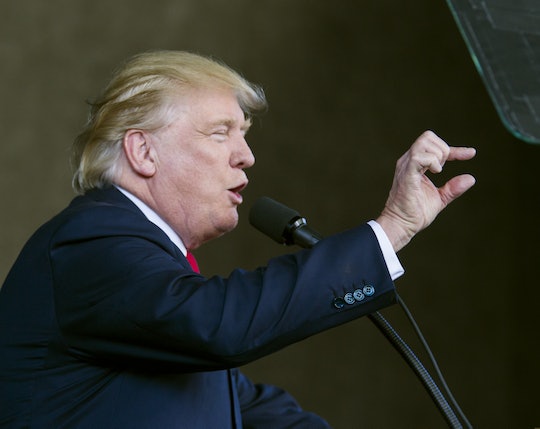 Could Donald Trump Still Win The Election? A Former Adviser Says No

It's almost over, folks. Only 16 days until Election Day, and as supporters of Democratic presidential nominee Hillary Clinton are breathing a collective sigh of relief, supporters of Republican presidential nominee Donald Trump have taken up the mantle of rigged-election conspiracies theories. But really, is this thing actually in the bag, or could Donald Trump still win the election? A former GOP adviser says it's pretty much impossible at this point.

As reported on Monday at Politico, Republican operative Jim Dornan, who was briefly an adviser on the Trump campaign last year, said that "Trump is done. Barring something completely out of the blue, like Hillary being involved in a murder, I don’t see how he wins."

It really doesn't get more definitive than that, does it? Dornan's stance is reflected in the most recent polling data, which continue to show Clinton leading by numbers that seem insurmountable within the two-week timeframe that Trump has remaining to somehow achieve a comeback. The polling aggregation website FiveThirtyEight, for example, currently projects that Clinton has an 85.1 percent chance of winning the presidency, while the aggregate polling average at RealClearPolitics.com has Clinton up by 5.5 points. Even Republican strategist Karl Rove threw up his hands over the weekend, telling Fox News on Sunday that when it comes to a Trump presidency, "I don't see it happening."

Despite all this, there's still reason to think that Trump could win — and reason for Clinton supporters to get out the vote. There is one important poll that continues to show the race in a dead heat, and that's the IBD/TIPP poll, a collaboration between Investor's Business Daily and TechnoMetrica Market Intelligence (TIPP). This particular poll is of importance because in the 2012 presidential race, it proved to be among the more accurate. The tracking poll, which is updated daily, currently shows Trump and Clinton tied at 41 percent in a four-way race.

Amid all this, of course, is the sound and fury of Trump's frequent allegations that polls can't be trusted, and that the election is rigged. While many liberal-minded citizens see this all as hogwash from a sore loser, Trump supporters are earnest in their belief that polls can't be trusted — except, of course, the ones that show Trump ahead. And there really are still polls showing Trump ahead, though there are far more showing that the race is all but finished.

Still, rather than breathing a sigh of relief, Clinton supporters should probably hold their breath all the way to the polls anyway, just in case.