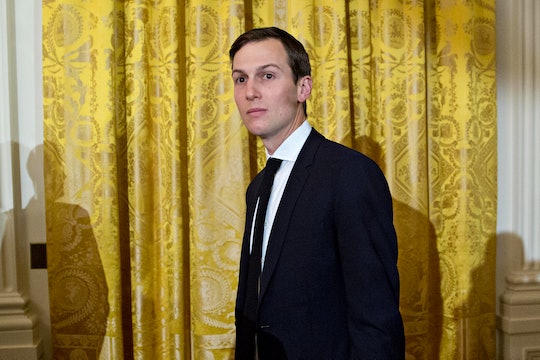 On Sunday, President Donald Trump broke his silence on the FBI's investigation into his son-in-law and senior adviser Jared Kushner, telling The New York Times in a statement: "Jared is doing a great job for the country. I have total confidence in him." However, other reports point to a tense relationship between the president and Kushner, and many are now wondering if Kushner could lose his job in the White House as a result of the FBI investigation.

Democrats have been calling for Kushner's dismissal from the White House ever since news first emerged that Kushner allegedly tried to set up private communications between the Kremlin and Trump's transition team. According to The Washington Post, U.S. officials said that Kushner and the Russian ambassador in Washington discussed using Russian diplomatic facilities to set up secret communication channels between the countries pre-inauguration. Several law enforcement officials confirmed to Reuters that Kushner's previously undisclosed communication with Russian officials had led the FBI to add Kushner to its ongoing Russia investigation. Romper reached out to the White House for comment, but did not hear back immediately.

According to ThinkProgress, Kushner's failure to disclose his meetings with Russian officials could cost him his security clearance in much the same way that Trump's former National Security Advisor Michael Flynn lost his (for lying to Vice President Mike Pence about his conversations with the Russian ambassador).

If Kushner willfully failed to disclose his meetings on security clearance forms, he could be facing criminal charges, according to ThinkProgress. Former acting CIA director John McLaughlan also told MSNBC that if an American intelligence officer had attempted to set up a similar secret communications channel, it would be considered espionage. Those aren't exactly light words for politicians to throw around.

"I don’t want to overstate this because obviously there is a lot we don’t know," McLaughlan told MSNBC last week, according to the Hill. "But I can’t keep out of my mind the thought that, if an American intelligence officer had done anything like this, we’d consider it espionage."

So far, the White House has kept quiet on Kushner, and Trump has only voiced support for his son-in-law and employee, so it's impossible to know whether Kushner's days at the White House are numbered. Judging by other politicians' comments, however, it seems that Kushner's missteps could cost him his security clearance — and, at worst, lead to criminal charges.

Until the FBI's investigation is wrapped up, it's unlikely that the American public will learn more about what's next for Kushner. But for now, despite the president's assurances to The New York Times that his son-in-law "is a very good person," it seems likely that Kushner is on thin ice at the White House.