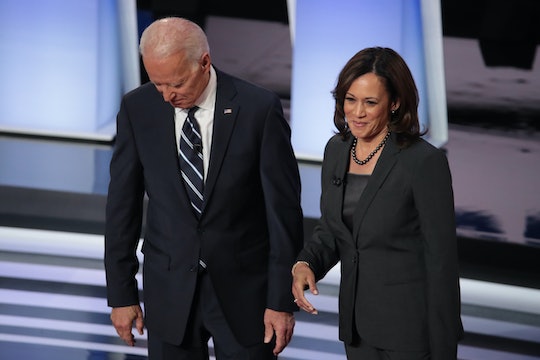 Before she was presumptive Democratic nominee Joe Biden's running mate, Kamala Harris was a 2020 presidential candidate. And as part of her campaign she proposed providing working families with up to six months of paid family and medical leave. But could Harris' stance on paid leave sway Biden, who has currently only proposed providing 12 weeks?

In October 2019, Harris rolled out her "Children's Agenda," a proposed policy package that, among other things, included a vow to pass legislation guaranteeing up to six months of paid family and medical leave. Under Harris' plan, all workers would have access to paid leave, including independent contractors, part-time and self-employed workers, CNN reported. What's more, workers who earn less than $75,000 a year would be eligible to receive a full replacement of their wages while on leave under her plan. At the time, the California senator's plan was reported by Vox to be "the most generous paid-leave proposal" put forth by any 2020 presidential candidate.

In unveiling her plan, Harris touted paid leave as a vital step toward both economic justice and children's future. "Guaranteeing six months of paid leave will bring us closer to economic justice for workers and ensures newborn children or children who are sick can get the care they need from a parent without thrusting the family into upheaval," Harris said in a October 2019 statement, according to CNN.

But although Biden supports creating a federal paid leave policy, his campaign has advocated for only 12 weeks of paid family leave. In "The Biden Plan for Mobilizing American Talent and Heart to Create a 21st Century Caregiving and Education Workforce" released in July, Biden said he would implement "federally-provided paid family and medical leave for up to 12 weeks" and up to seven days of paid sick leave.

On Tuesday, Biden announced he'd selected Harris to be his running mate in the 2020 election, noting he'd been especially drawn to her determination and tenacity. "Whether it's taking on the big banks or pushing for marriage equality — Kamala never shies away from fighting tooth and nail for what's right," Biden tweeted. "It's why I chose her to be my running mate. She'll wake up every day thinking about how to make life better for the people of our country."

For now, however, it's unclear whether Harris will be able to sway Biden to double the amount of paid family and medical leave his campaign has promised to provide working families. Currently, the United States is the only developed country to not have a paid family leave policy. And while 12 weeks is certainly better than nothing, Harris' six month plan would not only put the United States more in line with the majority of the world's other developed nations, but give working parents peace of mind in knowing they won't have to choose between their income and caring for a new child or sick family member.