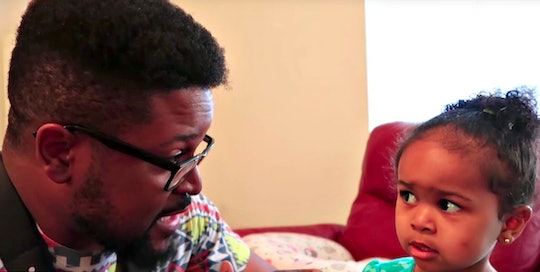 This Toddler Doesn't Understand Hide & Seek & It's Too Much

Sure, toddlers can be absolute terrors and make you question everything you thought about parenthood. But sometimes it's nice to remember that even though it feels like they're the masterminds behind a top-secret plan to drive you insane, toddlers are just toddlers — no schooling, no time to wise up about life yet. If you're going through the experience of raising one at the moment and need a reminder of that this week, all you need to do is watch this dad's hide and seek toddler video to remember that kids really have no clue what's going on and mean well at the end of the day. Really — every time you start to think your tiny human has a master plan to make you pull all of your hair out, just remember that they can't even figure out the rules of a simple game of hide and seek... and it's honestly too funny to handle.

More Like This
This Problem-Solving Toddler Filled Up His Toy Car With “Gas” From The Garden Hose
Vaccinated People Can Ditch Masks. Where Does That Leave Kids?
The 7 Best Water Tables For Your Little Ones
The Best Splash Pads For This Summer

Dad vlogger La Guardia Cross recently posted a video called "Hide and Seek Fail" that depicts him trying to teach his 2-year-old daughter Amalah how to play hide and seek. It should be simple enough, right? One person hides, the other counts, and that's it. Alas, Amalah did not get it. Every time her dad, with his infant daughter in a carrier, turned to the wall to count down, Amalah would simply run up the hallway, in plain sight, and copy her father's behavior.

Or, she would run up and poke or smack her dad while he was counting, totally negating the whole "hide" and "seek" aspects of the classic game. Sheesh, Amalah, get it together.

Eventually Amalah tries to enlist her little sister, now laying on the couch trying to nap, into the game. Hilarity ensues as La Guardia Cross takes advantage of his video editing skills and pretends to start playing the game with her instead. Unfortunately for Amalah, the newborn gets the purpose of the game right away.

La Guardia Cross has been vlogging his "New Father Chronicles" since 2014, just after Amalah was born, focusing on what life is like raising a small, adorable human being. In a recent video titled "Big Girl," Cross tries to teach her the the "5 steps to being a big girl," the first of which is saying "yes."

Which she does, immediately surprising her dad. "That's the first time you've ever said yes. So when I tell you to go to sleep, will you say, 'yes,'" he asks, like any good parent would. Amalah proceeds to slam her toys on the table and yell "daddy" over and over again, then insists on singing a song. Cross has obviously met his match. He adds, not exactly in the name of empowerment but more in the name of getting out singing a silly song with her, "It's OK to say no, too."

"It's OK to say no to things that can harm you, like singing the 'Family Finger' song," he quips, still hammering home an important point.

She seems to get it. Amalah now knows all about consent... but unfortunately still can't figure out hide and seek.

As any parent of a toddler knows, it's all about knowing when to pick your battles.