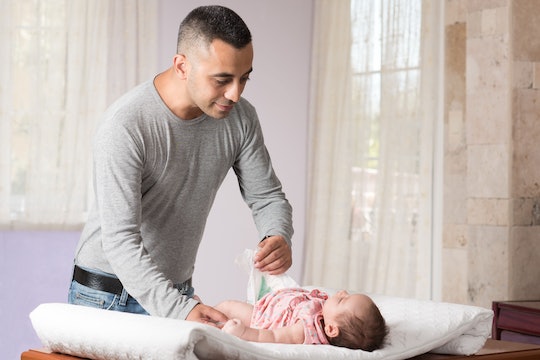 As one of his last acts in office in 2016, President Barack Obama signed into law the Bathrooms Accessible in Every Situation Act — or BABIES Act — into law. The legislation required all publicly accessible federal buildings to have diapering facilities in both women's and men's bathrooms, in large part a response to the dearth of changing tables in male restrooms, particularly. Now, in the spirit of the BABIES Act, a new amendment will expand changing table access to men's bathrooms in airports, which is so important for dads everywhere.

The U.S. House of Representatives passed the amendment, introduced by Democratic Rep. Bonnie Watson Coleman of New Jersey, on Friday as part of the Federal Aviation Administration Reauthorization of 2018, according to CNN. The Watson Coleman amendment, in essence, would mandate that medium and large hub airports — those facilities that serve least 0.25 percent of total passenger boardings each year in the United States — to install baby changing tables in at least one women's and one's men's bathroom in each passenger terminal building, CNN reported.

Watson Coleman said in a statement emailed to Romper, "This amendment is a small gesture that will have a large impact on families traveling with young children."

With this language, we’re ensuring adequate changing stations that can be accessed by both mothers and fathers — preventing them from having to sit their children on sink counters or the floor to be changed, and limiting the burden for families with more than one young child so that fathers can share the responsibility.

The Senate will take up the FAA Authorization bill sometime in May or June, a Republican aide to the Senate Commerce, Science, and Transportation Committee told CNN. A long-term reauthorization bill should be in place by late summer, CNN reported.

Other cities have made similar strides to what Watson Coleman's amendment proposes. On Monday, Baltimore City Council will take up legislation expanding diaper changing amenities in public buildings, including more changing tables in men's restrooms, according to WMAR. And last year, New York City passed legislation that requires all public restrooms in new businesses to have changing tables in both women's and men's bathrooms,Working Mother reported.

But installing changing tables in more men's bathrooms across the country is not just about making sure "dads do their part" when out in public. It's also about being inclusive of gay men who are parents, stay-at-home dads, and dads who are single parents — the latter two are among the fastest growing parenting populations, according to statistics.

In 1989, only 1.1 million men identified as stay-at-home dads, according to Pew Research Center. More than a decade later, and that number jumped to 2 million. As for single fathers, the number of men who were sole parenting increased 9-fold over a 50-year period, Pew Research Center reported: From less than 300,000 in 1960 to more than 2.6 million in 2011.

So it's fair to say that there are millions — millions — of dads who need changing tables. So much so that one stay-at-home dad, Scotty Schrier, started a blog listing businesses that had changing tables installed in their men's bathrooms, according to POPSUGAR. Schrier said in 2016, POPSUGAR reported:

Being the involved dad, I'm like, 'Yeah honey, I got this,' you know, so I grabbed the diaper bag, I grabbed the kid, and it never dawned on me that I might walk into the bathroom and there wouldn't be a changing station. You can carry a pad all you want but it's still on the floor.

Watson Coleman's amendment is a necessary step in the right direction of making parenting in public more inclusive. Although, according to Pew Research Center, more than half of Americans believe mothers "do a better" job than dads at caring for a new baby, the fact of the matter is, millions of dads are doing that job alone, and they need just as much as support — in and outside of the men's bathroom.