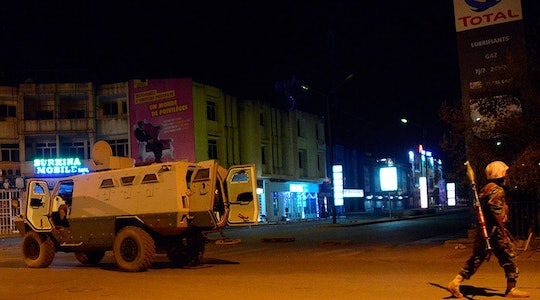 A group linked to Al-Qaeda has claimed responsibility for a terrorist attack on Saturday at a Burkina Faso hotel, killing 23 people and wounding 33 more in the capital city of Ouagadougou in the West African nation. The attack occurred at the Splendid Hotel, a four-star hotel in the capital city, as gunmen opened fire and set off explosions in the popular hotel and restaurant and a nearby cafe. An additional 126 hostages were released following the hours long siege between the terrorists and security forces. Four assailants, including two women, were killed in the exchange. A fifth assailant was seen fleeing into a bar, according to witnesses.

The hotel is popular with foreign tourists and UN personnel: The 23 dead came from 18 countries. The assailants are believed to have been members of Mail-based terrorist network Al-Murabitoun, at the direction of Al-Qaeda in the Islamic Maghreb (AQIM), according to a statement discovered by U.S. intelligence monitoring group, SITE. According to the statement, the attack was perpetrated as "revenge against France and the disbelieving West." Interior Minister Simon Compaore has stated that 10 bodies were found on the terrace of a nearby cafe. Witnesses at the scene described horrific scenes of fires, bodies, and blood as security forces neutralized the terrorist threat and regained control of the hotel.