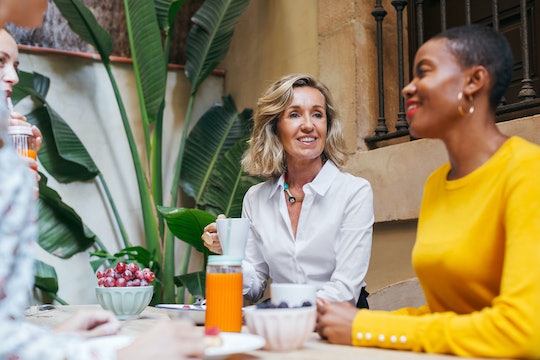 Is Mother's Day Brunch An Exercise In Tyranny For My Mother-In-Law?

Before we had kids, I was happy to go along to Mother's Day brunch with my husband's family, because my mom is interstate and, hey, free brunch. Now that I have my own kids, it feels like the whole thing is still bent to satisfying my husband's mom. She is still the one spearheading Mother's Day plans, and it's a given that we'll spend that day with her. I don't want to ditch her, necessarily, but it feels like my husband's efforts around Mother's Day are ENTIRELY ABOUT HIS MOM and not me. OK, so I'm not his mom, but I am the mom of his kids. How should this look?

It is my fervent and longstanding belief that OBLIGATION RUINS WEDDINGS AND HOLIDAYS. And Mother's Day is sacred. If you're a mom, it's your day.

Your situation is tricky, though, IAMTR. A precedent was set before your kids were born, and it wasn't nipped in the bud on your first Mother's Day (MAYBE BECAUSE YOU STILL HAD A VERY YOUNG CHILD AND WHO HAS THE ENERGY TO START A POTENTIAL CONFLICT I DO BUT YOU PROBABLY SHOULDN'T).

It's concerning that your mother-in-law is "spearheading" the Mother's Day plans. This implies she's making plans to celebrate herself, which is a red flag (although as someone who spent many years passively expecting my significant other to surprise me with amazing birthday plans, I understand taking charge of your special day). But it's more concerning that she hasn't made any changes since you became a mom. And you indicate she's paying for the brunch, which means she's greasing the wheels for everyone to say yes. Which means it's really important to her. Which is something we need to keep in mind as we proceed.

Then there's the fact of your husband not taking the reins. But here's the thing about husbands, or people in general: They're not mind readers. Even when things seem to be really f*cking obvious. One Christmas, I planned the perfect gift for my boyfriend at the time weeks in advance. It was nothing fancy, because we'd agreed on nothing fancy, but it was something I knew he would love, and I had to order it on the internet, and it had to be shipped from overseas. My boyfriend, on the other hand, went to Target 45 minutes before our gift exchange and came back with a set of kitchen towels and a puzzle. A PUZZLE. A SMALL METAL PUZZLE IN THE SHAPE OF A TREBEL CLEF THAT HAD A HALF NOTE STUCK ON IT SO YOU HAD TO FIGURE OUT HOW TO GET THE HALF NOTE OFF THE TREBEL CLEF. Children were watching, so I excused myself to go to the bathroom and cry. When I came back to the living room, my boyfriend was PLAYING WITH THE PUZZLE.

The thing is, my boyfriend was not a moron. He was not lazy. But I hadn't been clear about my expectations. So I got a puzzle for Christmas.

Once you're in a long-term committed relationship, your primary relationship becomes your partner and, if you decide to have any, your kids.

If you have expectations around Mother's Day, you're going to have to be explicitly clear with your husband. But if it involves any changes to your tradition, it's his job to communicate those to your mother-in-law — and to do it in a way that backs you up, which means either acting as if the changes are his idea or acting as if the two of you want these things together. And if he doesn't feel that way, too bad. He's not allowed to have a conversation with his mother in which he blames you for anything.

Because this is the thing, IAMTR: Once you marry, or even once you're in a long-term committed relationship, your primary relationship becomes your partner and, if you decide to have any, your kids. Although our parents remain critically important WHO ELSE IS GOING TO BABYSIT FOR FREE, your loyalty has to switch for your marriage to work. If what's really going on is that your husband doesn't understand this, he needs to be made aware (explicitly), by you.

Now for your mother-in-law: Let's assume the best: When she was the only mom in the picture (and in the state), she really wanted to spend time with you OR ONLY HER SON I DON'T KNOW MAYBE SHE HATES YOU, and you weren't doing anything else for Mother's Day, so it was a perfect opportunity to offer to buy you breakfast. And when no one said boo after you became a mom, she continued what had always been a pleasant tradition. And because it's obviously important to her, you want to be tactful and kind if you (I mean your husband) will be suggesting any changes.

From the tone of your email, it sounds like this situation is not a major conflict. BUT THERE'S ALWAYS TIME. So it's important to start this conversation now and make a change sooner rather than later, because you're starting to seethe, and seething only leads to people hiding in their children's forts drinking wine out of sippy cups in the middle of the day.

You also might want to get clear on how broad this issue really is. Is it just this brunch? Great. Super. Keep the conversation to that. But is it bigger than that? Does your mother-in-law insert herself in other ways? Do you feel your husband's loyalty is mixed in a way that has the potential to hurt your marriage? If that's what's really going on, don't sweat the brunch: Prepare for a larger conversation that might need mediation in the form of a nice therapist with a cozy office and lopsided pottery and real plants. REAL PLANTS.

After you've worked out what this is about and have some ideas about solutions, approach your husband calmly I'M ALWAYS CALM WHAT DO YOU MEAN. It may be an easy conversation; it may be a hard one. But go in with an open mind, and try not to put him on the defensive too early YOU CAN SAVE THAT FOR LATER. Start with "I" statements about how you feel, and avoid "you" statements that accuse or blame (although I used all "you" statements and I still got earrings and a necklace!). This is his mother you're talking about, so this may be hard for him, too. I have an idea! Give him a puzzle to play with.

PEOPLE DON'T KNOW WHAT YOU WANT UNLESS YOU TELL THEM. WE ALL WANT THE OTHER PERSON TO DO THE WORK OF FIGURING OUT WHAT WE WANT BUT IT DOESN'T WORK LIKE THAT, EVEN WITH SPOUSES. IT SOUNDS LIKE YOU WANT YOUR HUSBAND TO CELEBRATE YOU ON MOTHER'S DAY SO TELL HIM TO CELEBRATE YOU. YOU MIGHT NEED TO GIVE HIM SOME IDEAS. I CELEBRATE YOU BECAUSE YOU'RE THE FREAKING BOMB. YOU GOT THIS.

More Like This
How Do I Date As A Widow Without Guilt?
This Is What It’s Like To Parent With OCD Right Now
How To Tell If Someone Is Lying To You: 34 Signs To Watch For
25 Mother And Daughter Halloween Costume Ideas That Are Cute And Spooky