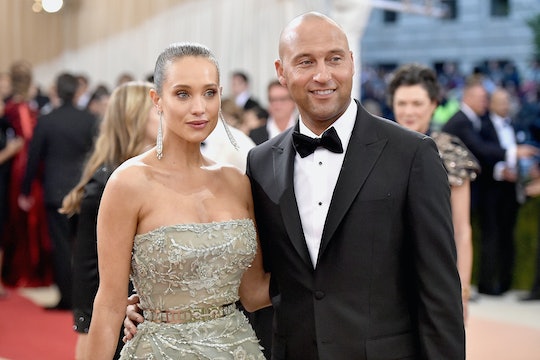 Baseball legend Derek Jeter and his wife, swimsuit model Hannah Davis Jeter, are apparently sneaky little rascals. Much like so many other celebrities out there, the couple are really great at keeping any news of an impending pregnancy under wraps, even when being frequently scrutinized in the public eye. But it seems as though they're ready to come clean: Derek Jeter and his wife Hannah are reportedly expecting a second baby, as evidenced by the sweet little baby bump Hannah Davis Jeter was seen sporting on Friday night.

As Us Weekly reported, the couple stepped out together on Friday in New York City, holding hands and looking happy. Hannah Davis Jeter was wearing a fitted black dress and yes, a baby bump was pretty clearly visible under her jacket. Multiple sources close to the couple confirmed the pregnancy with Us Weekly, but neither Derek nor Hannah have given the definitive word that they're expecting again. Jeter did kinda/sorta hint that the couple were expecting a second baby back earlier this week at the 22nd Annual Turn 2 Foundation Gala at Cipriani in New York, of which Jeter is the chairman and founder. He spoke to Extra about children, and when asked if there were more on the way admitted; "Yeah, there’s a few more... you’re slick! I see that!”

Romper has reached out to a rep for Derek Jeter for confirmation and is waiting to hear back.

The couple, who were married on 2016 in Napa Valley, California after dating for four years, are already parents to one little girl. Their daughter Bella Raine turned one year old on Aug. 17, and it looks as though she's going to be a big sister. Which apparently suits these new parents just fine, since they are really loving their time with their little girl. A source close to the couple told Us Weekly last year:

They’re really enjoying spending time with Bella and raising her out of the spotlight. This has all been very exciting for them. They’re the perfect fit.

The proud dad was waxing poetic about how his daughter has helped to change his perspective when speaking to Extra earlier this week as well, saying:

It’s awesome. Regardless of what happens in the course of a day, when you get home and you have your daughter there, it puts a smile on your face, so I have no complaints whatsoever.

Now that Jeter has retired from baseball I like to think he has all the time in the world to spend with his little ones, and he certainly sounds like he doesn't want to miss a thing. As he told Us Weekly in May, he's managed to be on hand for some of her biggest milestones:

She’s crawling. She’s pulling herself up. She’s standing up. She’s going to be walking soon.

Now it looks like he might have another little one running around the house in the near future. Which, as the rest of us parents of multiples know, ends up being a total game changer.