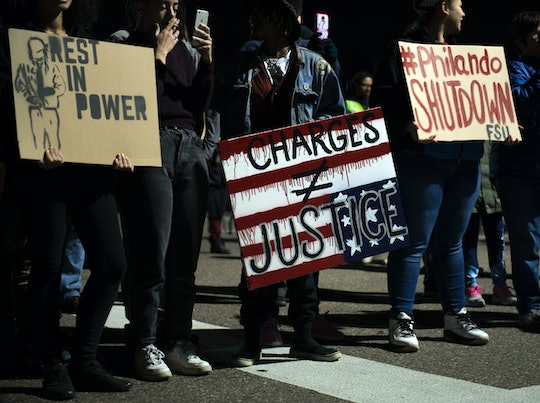 Diamond Reynolds' Daughter Begged Her Not To Get Shot, Footage Shows

There's an age old saying that children are like sponges — they absorb everything they see and hear. But when a child has to witness a tragedy, the one thing you wish is for them to do the opposite and for someone take away what they just saw or heard. When people talk about the shooting of Philando Castile, they often talk about how his girlfriend, Diamond Reynolds, captured the shooting on Facebook Live, but sometimes fail to mention her young daughter in the back seat, witnessing the scene unfold. Now, newly-released footage from the day shows how, in the moments after the shooting occurred, Reynolds' daughter begged her not to get shot like Castille, and words cannot describe how upsetting that is.

Reynolds' daughter was only 4 years old when she witnessed, from the back seat of the car, her mother's boyfriend get shot seven times by a Minnesota police officer during a traffic stop. According to BuzzFeed, a new video released by Minnesota investigators, taken from the back of the police car they placed Reynolds and her daughter in after the shooting, captures the moments that occurred directly after, as both tried to make some kind of sense of what just happened.

In the video, the young girl and her mother sit in the back of a police cruiser crying, and Reynolds' daughter begs for her mother to calm down so she won't be shot by the police as well. (Once again, this is a 4-year-old.) "Mom, please stop cussing and screaming, I don't want you to get shooted," she pleads.

The footage is incredibly tough to watch, but if you're looking to view the whole video, please proceed with caution.

No one will ever be able to describe how Reynolds' daughter must have felt, right after the incident, a witness to her mother's pain and suffering and Castile's shooting. At her young age, it is clear that Reynolds' daughter already had a pretty solid understanding of what was going on. However you want to take that, it's crushing to say the least.

According to Parenting, at 4 years old, the brain begins developing in a way that allows children to hone in on abstract thought, have better impulse control, and understand a sense of time. A Washington Post profile on Reynolds highlighted just how well her daughter reacted during the moments before and after Castile was shot. Reynolds, according to the profile, raised her daughter with "survival skills" from the age of 2 — which included ducking at the sound of gunfire and "making yourself small" when you feel threatened. Which is why Reynolds' daughter remained quiet during the shooting and was so quick to console her mother in the moments after. The Daily Beast labeled Reynolds' daughter, just two days after the shooting, "the bravest little girl in the world." But should she have been?

There is no denying that what Reynolds' daughter saw will stick with her for the rest of her life. The moments captured on camera after the shooting make that much abundantly clear. There was no reason that, as a kid of just 4 years, she should have witnessed what she did at all. But, this footage shows that she was able to hold her own and do what she could for her mom, providing some safety and comfort when they needed it the most. And that's both a blessing and a tragedy all at once.