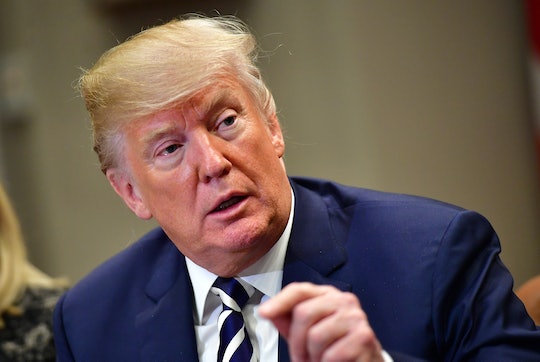 Did Joe Biden Actually Threaten Trump? POTUS Says Biden "Would Go Down Fast" In A Fight

It's Thursday, which means President Donald Trump tweeted something obscene again. This time, the president decided to puff up his chest on Twitter and lash out against a certain vice president who he believes "threatened" him at a recent event. But did former Vice President Joe Biden threaten Trump? No... no he did not.

To understand why Trump would go after the Uncle-in-Chief, let me take you to earlier this week. On Tuesday, Biden spoke at an anti-sexual assault rally held at the University of Miami, according to CNBC. And at this rally, Amtrak Joe referenced the infamous 2005 Access Hollywood tape where Trump made offensive and nasty comments about grabbing with "by the p*ssy" without permission. Biden said at one point during his speech, "If we were in high school, I'd take him behind the gym and beat the hell out of him," CNBC reported.

That's not exactly a threat. Biden didn't say he "would" kick the president's behind. Nor did he even speak in the present tense. To be fair, Biden could have made his point more eloquently, and, really, it's not a good look for a vice president, or anyone, to promote violence. But a threat? No.

In fact, Biden didn't even make that comment as a stand-alone statement. Trump and his followers have taken what the former vice president said way out of context. Here is a fuller snippet of what Uncle Joe said on Tuesday, according to The Guardian:

A guy who ended up becoming our national leader said, ‘I can grab a woman anywhere and she likes it.’ They asked me if I’d like to debate this gentleman, and I said ‘no.’ I said, ‘If we were in high school, I’d take him behind the gym and beat the hell out of him.’

But that didn't stop Trump from interpreting Biden's comments as such. So Trump, doing what Trump does best, showboated on Twitter. The president tweeted Thursday morning:

Crazy Joe Biden is trying to act like a tough guy. Actually, he is weak, both mentally and physically, and yet he threatens me, for the second time, with physical assault. He doesn't know me, but he would go down fast and hard, crying all the way. Don't threaten people Joe!

This is not the first time Trump has said he could take Biden "down." At the annual Gridiron Dinner earlier this month, the president talked about Biden's potential 2020 presidential run, and referenced past comments the Uncle-in-Chief made about taking Trump out behind a barn, according to Deadline. In response, Trump told the Gridiron audience, "I would kick his ass like no other... man, would he be easy," Deadline reported.

Semantics aside, this whole situation is a mess. What both Biden and Trump have said are gross displays of toxic masculinity. It's more so disappointing with Biden, because, as The Washington Post noted, he is a man who takes sexual assault against women seriously. But with Trump, it's downright frightening. This is the President of the United States, who white people overwhelming voted for, using a social media platform to show off his misguided bravado because Trump — as he and his followers won't let anyone forget — "won't take any crap from anybody."

If only Trump put as much energy into "making America great again" as he does defending himself against imaginary threats, imagine where the country would be. Probably still a dumpster fire, but maybe a low-level one at best.