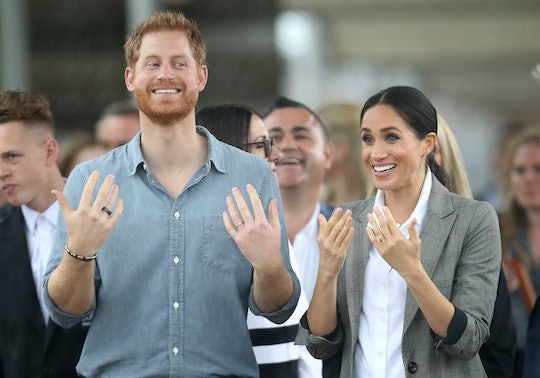 Meghan Markle is due to give birth to her first child with her husband, the United Kingdom's Prince Harry, within the next few weeks — and fans are beyond excited for her. People are finally ready to find out the sex of her child — but fans seem to think they already know what Markle's having due to a statement made by one of the duchess' friends. So, did Serena Williams disclose the sex of Meghan Markle's baby? She might have — here's how.

Earlier this week, the champion tennis player gave an interview to E! News where she told them about her pregnant friend who needed a bit of advice from her when she was talking about raising her child. Although William's didn't use any names, fans automatically assumed that she was talking about her most famous pregnant friend, Markle — and people picked apart her pronoun choice because of this, according to TODAY.

"My friend is pregnant," Williams said in the interview. "And she was like, 'My kid's going to do this.' And I just looked at her and was like, 'No she's not. No, you're not.'"

Can you see why this might cause some concern? It's because Williams said "she" when referring to her friend's kid. But Williams can have more than one pregnant friend, of course. And just because she used one pronoun over another doesn't mean anything. It's very likely that Williams' cute story about how parenting plans go astray isn't even about Markle.

And if it was, Markle has said herself that her and her husband are keeping their baby's sex a surprise, according to Town & Country. So, it's likely that Williams doesn't know about the sex of their baby. It's as simple as that.

In the very same interview, Williams said that she excited to see Markle raise a child, according to E! News.

And she had a key piece of advice for all moms-to-be. "Accept mistakes and don't expect to be perfect," Williams said, according to E! News. "We put so much pressure on ourselves."

Williams would be the one that moms-to-be would want to turn to — she's the mom to the sweetest 1-year-old daughter, Alexis Olympia Ohanian, and has learned so many lessons since giving birth to her daughter in September 2017. Williams told People on Wednesday that she has spent every single day with her daughter since she gave birth, and every single day is a new learning experience for her.

Needless to say, when Markle might need some parenting advice, she definitely knows who to call.

There's no denying that the two women are pretty close and have been close throughout Markle's pregnancy. Williams is rumored to have attended Markle's baby shower in New York City this past February, according to Town & Country, and has maybe already sent her diapers (thanks to her new partnership with Pampers), according to Reuters.

Whether Williams is providing her very famous friend with some helpful parenting advice or an extra pack of diapers, she will be a huge help once Markle's baby arrives.