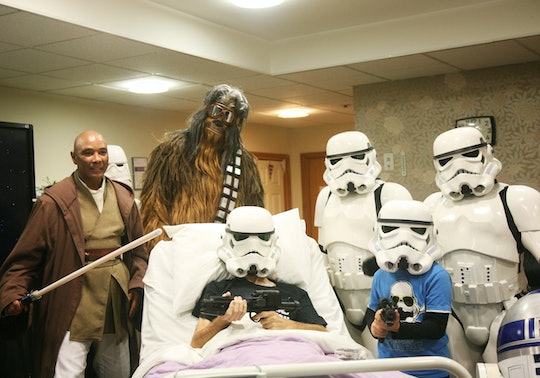 Sometimes the best presents aren't found wrapped in paper under the Christmas tree. Instead, they're gifted straight from the heart. A charity hospice in Hampshire, England, teamed up with Disney to gift a terminally-ill Star Wars fan an advanced screening of Star Wars: The Rise of Skywalker over the Thanksgiving weekend. In doing so, the two helped fulfill the fan's last wish of watching the long-awaited movie with his young son.

"Small acts of kindness happen in Hospices across the world every day," a spokesperson for Rowans Hospice tells Romper. "One day it might be knowing and putting on the patient's favorite radio station, the next day it might be turning a patient's bed to face mecca, it could be one of our duty drivers going out to get a pint of Guinness for a patient to hold and smell one last time ... the next day it could be trying to convince a globally renowned, multi-billion dollar company to let us have a copy of one of the most anticipated movies in the last 10 years, three weeks before its release date."

This specific act of kindness, however, came to be after Lisa Davies, a Health Care Support Worker, noticed a patient's Boba Fett tattoo and struck up a conversation with him about it. As it turned out, the patient was a huge Star Wars fan and expressed regret that he would not get to see the final film with his son. Inspired, Davies reached out to the marketing team at Rowans Hospice to inquire about launching a social media campaign to fulfill the patient's wish of seeing the film with his son.

"Can you help? We have a patient who's a HUGE #StarWars fan," Rowens Hospice tweeted Nov. 26. "Sadly, time is not on his side for the 20th Dec. [release date.] His wish is to see the final Star Wars film #RiseOfSkywalker with his young son. If you know ANYBODY who might be able to make it happen, please share with them."

And share they did. So much so that, just two days after posting their plea, Disney CEO Robert Iger announced he would grant the patient's wish and send someone to screen the film for the family. "On this Thanksgiving, we at @Disney are grateful to be able to share #TheRiseOfSkywalker with a patient and his family @RowansHospice," Iger tweeted Nov. 28. "May the force be with you and with us all!"

The hospice shared that a Disney representative showed up Friday morning with the film ready for screening on a laptop. But the patient's family didn't just get to watch Star Wars: The Rise of Skywalker before anyone else, they got to enjoy a Star Wars viewing party, courtesy of Rowans Hospice. The hospice revealed they threw a Star Wars themed party for the patient complete with Stormtroopers, a Jedi, a Wookiee, and droids. "A brilliant time was had by all," the hospice tweeted.

In a statement shared by Rowans Hospice, the patient, who has asked to remain anonymous, extended his gratitude to everyone who helped make his wish come true. "I just want to say the biggest thank you to everyone that has helped to make this happen," he said. "During what is just a horrible situation to be in, you have helped to make some wonderful memories and bring some joy to my family."

The patient went on to say he'd been waiting more than 40 years to see the final episode of the Skywalker saga. "I am a huge Star Wars fan and what I am going through is completely dire," he said. "Then to top it all, I thought I wasn't going to see the film I have been waiting to see since 1977!"

Still in disbelief over Disney allowing him to see the movie more than two weeks ahead of its release date, the patient said he felt like he'd hit the jackpot. "I still can't believe it," he said. "The only way I can describe this to you is to say that this must be what it feels like to be told you have won a million pounds!"

In a separate statement shared by the hospice, the patient's wife said she was humbled by the level of support everyone has shown. "What has happened over the past few days has been truly mind-blowing," she said. "From a simple conversation, to witnessing the out pouring of generosity has been amazing."

That generosity wouldn't have been possible if it hadn't been for Davies, the team at Rowans Hospice, and Disney. "I don't think any of us in our wildest dreams expected at this time last week that we could achieve it, mostly because of the lack of our time in our setting," a spokesperson for the hospice tells Romper. "But we will always do everything within our power to fulfill the wishes of our patients."