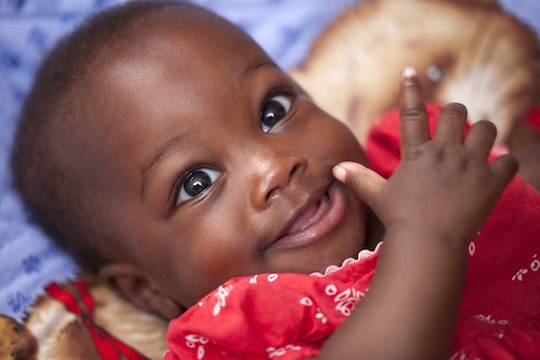 Do Babies Hear? It's A Skill They Learn Early

Babies are known for a lot of things — crying, kicking you while they're inside of you and outside of you, and pooping. (Seriously so much pooping.) But babies are also known for being adorable, squeezing your finger with their tiny hands, and staring intently at you. But when you're telling them how much you love them, do they know? Do babies hear?

Whether your baby is in the womb or in your arms, babies can hear you. According to The Today Show, a study found that babies not only hear what their mothers say during pregnancy, but their brains recognize those words after they're born, too. What To Expect noted that as early as six weeks into a pregnancy, your baby's ears are already beginning to form (though the mechanics of hearing aren't quite there yet), and by week 16 of your pregnancy, your baby could detect some limited noise like the sound of your body from the inside.

So by the time your baby's born, not only can they hear, but they can recognize your voice, according to Parenting. In fact, babies show a preference for their mother's voice and researchers think that happens because your baby is hearing you in two different ways — through the vibrations of the vocal chords and as a sound through the abdomen.

Many parents worry about loud noises disturbing a baby, but Parents noted that babies actually enjoy white noise, like a vacuum cleaner, and music because of the loud sounds they heard while in your womb. Don't be afraid to make some noise while they're napping — it might even help them sleep.

If you're nervous that your baby doesn't hear, however, it's worth mentioning to your doctor. Baby Center noted that there are some warning signs to pay attention to you if you think your little one has a hearing issue like if they aren't startled by sounds, if they don't turn their heads to identify sounds they can't see in front of them, and if haven't begun to imitate sounds by 6 months old.

But, in most cases, babies do hear. In fact, they can probably hear before you even feel them kick inside of you. Hearing is an integral part of your baby's ability to speak and communicate, so it's incredible to know that it happens so early. But enjoy this whole hearing thing while it lasts — once they become toddlers, all of those listening skills seem to vanish into thin air.