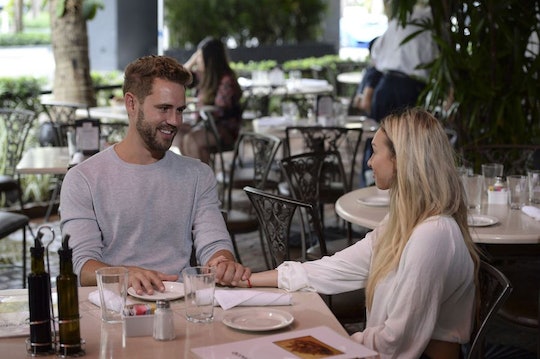 Once upon a time, the season villain of The Bachelor was good for a few episodes and was eventually eliminated from the competition before things got too serious. On Season 21, though, things have been different to say the least. So considering all of the antics that she's pulled, do Corinne and Nick get a hometown date on The Bachelor? She's made it this far on the show, so my guess is that would be that yes, she gets one, despite her apparent worries on the latest episode.

Calling Corinne the villain of Season 21 of The Bachelor isn't fair, though. Sure, she's ruffled a few feathers and hasn't seemed to make a new best friend out of anyone, but she's also done what everyone is there to do, and that's get close to Nick. The whole point of The Bachelor is to find love and, hopefully, a future spouse, and Corinne has done what she had to do to secure her place with Nick. So does Corinne get a hometown date on The Bachelor? It would be surprising if she didn't, given how far she's gotten this season.

Viewers see a side of Corinne that seems sometimes manipulative or spoiled but, according to the recently announced Bachelorette Rachel on Jimmy Kimmel Live, that's not necessarily the real Corinne. And it makes you want to have more faith in her making it even further.

Every season needs to have that common enemy for the rest of the contestants to dislike together. It's not an awesome dynamic, but this season has had Corinne, and Season 12 of The Bachelorette had Chad. In the world of Bachelor Nation, that's just the way things go each season. But while Corinne may have been made the house villain early on (and didn't really help her case much of the way), there's a lot more to her than that status.

Yes, she has a nanny named Raquel, but as she has explained, Raquel is someone who is close to her and her family and has been there for much of Corinne's life. She's even called Raquel her "best friend" on The Bachelor, and took to social media to defend her against negative comments. And OK, Corinne is definitely not shy when it comes to getting close to Nick physically, but she should be admired for her confidence, not shamed.

Corinne is just being Corinne and Nick has seen something in her to make him keep her around this long. So most likely, Corinne and Nick will have a hometown date on The Bachelor, if only to allow fans the opportunity to see Raquel again and get to know the woman behind the cucumbers and cheese pasta.