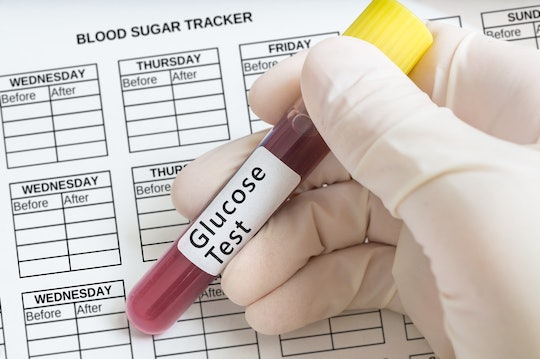 Here's Why The Glucose Test Is So Important

When you're expecting, the clinic and labs can become your own version of Cheers. "What can I get you today, a blood test? A urine test? How about both?" The endless ultrasounds, checkups, and testing make you a regular at the doctor's office where you can get the inside scoop on what's going on in your body. Along with the number of urine and blood tests you have to get, you may hear about a glucose test, too. If you're tired of all the poking and prodding, you may wonder, do I have to take the glucose test? You don't have to, but you probably should, because according to the Centers for Disease Control and Prevention, about one in 10 pregnant women will develop gestational diabetes.

According to the American Diabetes Association, gestational diabetes can develop in a pregnant mom when hormones from the placenta cause an insulin resistance, not allowing her body to make and use the insulin it needs. Without enough insulin, high levels of glucose can build up in her blood, resulting in hyperglycemia (high blood sugar).

The American Diabetes Association also suggested that if gestational diabetes is left untreated, it could harm your baby — when your high blood glucose goes through the placenta to your baby, it can raise their glucose levels, pushing their pancreas to create more insulin. This extra action by the baby's pancreas can lead to the baby being born with macrosomia, or very low blood glucose levels, putting them at a higher risk for breathing problems, and a higher risk of becoming obese children or diabetic adults.

A glucose test during pregnancy is given to test the potential presence of gestational diabetes, according to the Mayo Clinic, and is done between week 24 and week 28 of your pregnancy. Sometimes the test is done earlier if you are especially at risk for gestational diabetes, due to having it in an earlier pregnancy, a family history of diabetes, obesity, or other underlying conditions that are associated with development of diabetes. Mayo Clinic noted that if there is an indication of gestational diabetes from the preliminary one hour test (called a glucose screening), your doctor will have you take another three hour test called a glucose tolerance test.

As explained by What To Expect, a glucose screening test and a glucose tolerance test will require you to fast overnight, and then require you to drink a very sweet (sometimes orange flavored) drink, followed by having your blood drawn to test for gestational diabetes.

If you can tolerate the super sweet drink, followed by some blood tests, a glucose test isn't too bad. Getting tested can give you better insight into what's going on inside your body, and if you do test positive for gestational diabetes, you and your doctor can work out a plan to manage and monitor your glucose levels. Knowing is always better than not knowing, and staying on top of things can provide a smoother pregnancy. (Even if you're not looking forward to that drink.)