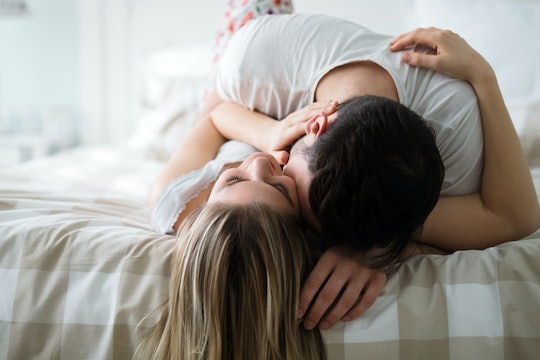 Do Men Have A Higher Sperm Count In The Morning? Asking For A Friend

When you're trying to conceive (TTC), there are a lot of factors to be aware of and daily routines to tweak. Things like taking your basal body temperature and testing your urine for ovulation hormones quickly become automatically engrained. No doubt you're also experimenting with different positions for sex, and maybe even changing your schedule to accommodate your expected date of ovulation. So is it going too far to try and work out the time of day when your partner's sperm count will be highest?

There's a lot of advice out there about timing, mostly centered around figuring out your exact moment of ovulation so you can flood your reproductive organs with sperm during that small window of opportunity. But there's more to it than that. There are two of you involved, after all, and couldn't your partner's contribution vary in potency depending on the time of day?

And even if it is higher in the morning, the difference is so minimal that it doesn't actually affect anything, said fertility expert Serena Chen in another Baby Centre report. For example, if his sperm count is 87 million in the evening, but 88 million in the morning, that's just a one percent increase. And since you only need one sperm to get the job done, that one percent really doesn't mean much.

So if it works with your schedule to get busy in the a.m., by all means go for it, but don't do it just because his sperm count might be ever so slightly higher. In fact, according to a 2006 study published on Research Gate, there was no difference in sperm count between morning and afternoon, but there was an increase in sperm motility in the afternoon. In other words, sperm were better at swimming later in the day than they were in the morning, as explained by Verywell Family. So even if your partner happens to have a higher sperm count in the morning, that difference might be offset by the sperm doing a better job of swimming later in the day.

But even if the time of day isn't going to affect your chances of conceiving, there is one timing factor that could make a difference: the time of year. In a 2013 study, researchers found that both sperm count and motility were highest in winter and early spring, and lowest in the summer. (Which, the researchers said, could explain why there are so many autumn babies, according to Medical Daily.) It's not clear why this is the case, but perhaps it has something to do with the fact that "heat can have an adverse impact on sperm quality," as explained by OB-GYN nurse practitioner Risa Klein to Romper in an earlier interview.

So if you're TTC, no need to worry about the right time of day to have sex. You've got plenty of other things to think about... such as the fact that it's still early spring! Take advantage of your partner's seasonally high sperm count and head for the bed, at whatever time works.