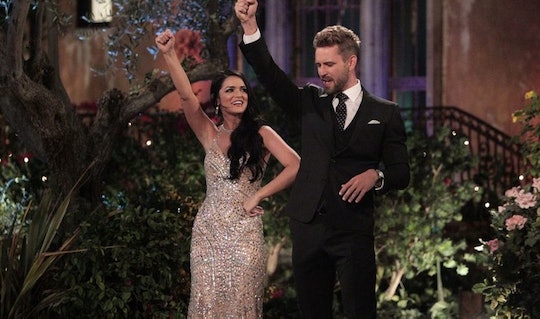 Raven & Nick Could Be 'The Bachelor's OTP

The promos for Episode 8 of The Bachelor show Nick unsure of whether or not he's going to have the usual four hometown dates this season or break tradition and just have three. On the one hand, it might be all for drama, but on the other hand, Nick hasn't had things progress in the most conventional of ways this season, so it could happen. And if he only takes three women, will Nick and Raven have a hometown date on The Bachelor?

She was the only contestant who got an actual date rose during last Monday's episode, since Nick was likely going to wait until the official rose ceremony to hand out the rest. But then he decided to send Kristina home before they could even do a cocktail party, so there was no real need for a rose ceremony at all. Apparently, there's been no need for one for a few weeks now, but that's beside the point. The shocking part was how Nick was still acting as though he could still send someone home that evening, meaning that one of the remaining women could be cut before they make their next big trip to each contestant's hometowns. But since Raven did get that date rose, is her spot in the next portion of The Bachelor secured?

At the end of Episode 7, Corinne said, "He's very unpredictable," which is a very accurate way to describe this season in general. Nick has been eliminating contestants left and right very suddently, without the need of a cocktail party to make it happen. So who's to say he'll keep the usual four hometown dates rule? In the promo for Episode 8, Nick appears to be deciding on what his next move will be. But even if Nick only picks three women, Raven will still probably get a hometown date thanks to that date rose.

There has been no real issues with them as a couple up to this point, whereas he's had discussions with Vanessa about her doubts and has had a lot of ups and downs with Corinne. Rachel is kind of a shoo-in, unless the news of her being the next Bachelorette is because she goes home early. But if anyone is getting the boot before hometowns, it will likely be Corinne or Vanessa, in my opinion.

Besides the fact that Raven and Nick seem like they actually click, she also posted a photo of them on Instagram the day after Episode 7 of The Bachelor aired with the caption, "Headed to Hoxie." (Hoxie, Arkansas, in case you didn't know, is her hometown.)

If all goes well, Nick will calm down and go through with the usual four hometown dates, if only to give viewers the chance to see Raquel again at Corinne's home and to meet Vanessa's adorable class up in Canada. But due to the fact that she already has a rose and there's no reason to assume otherwise, it's all but confirmed that Raven gets a hometown date on The Bachelor. And I couldn't be more thrilled.