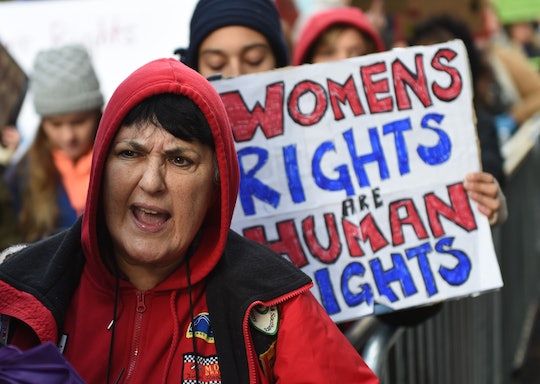 Have You Registered For The NYC Women's March?

President-elect Donald Trump will be sworn-in as the 45th President of the United States on Friday. I hope he's not expecting a peaceful day of contemplative yoga to ease his way in on his first day in office or anything, because hundreds of thousands of women across America will be using Jan. 21 as a day to make sure their voices are heard. Women's marches are planned in dozens of cities in the United States as a symbol of strength and unity to mark the first day a man who has demeaned women, a disabled person, and a number of people from different races and ethnicities officially takes office. Wondering if you need to register for the Women's March in New York City? Unfortunately it's too late to register as a group, but there's still time to register as an individual.

The New York City Women's March is all about empowerment; the organizers have described their mission as a way:

To provide a safe and accepting platform for supporters of equality to rally and march in promotion of civil rights for every human regardless of gender, race, sexual orientation, ethnicity, disability, religion, or creed.

Marchers will have several opportunities to assemble and protest throughout the Inauguration weekend, with the NYC Women's March beginning on Jan. 21 at 11 a.m. at Dag Hammarskjold Plaza (47th Street between First and Second avenues).

As of Jan. 7, more than 40,000 people had registered to march in New York City. Protesters of all kinds will assemble to peacefully protest the presidency of Donald Trump as a unified, accepting, diverse group of people; a concept that continues to escape Trump as he encourages divisiveness, hatred, and contempt. Whether he's attacking the "fake" media, the United States intelligence community, or disrespecting civil rights hero Rep. John Lewis on Dr. Martin Luther King Jr. Day, Trump has set himself up as one of the most maligned presidents to take office in living memory... before he even takes office.

To register for free to join the New York City Women's March (which is expected to go on from 11 a.m. to 4 p.m.), simply click here. The Women's March, like its sister march in Washington set for the same day, is open to every single person who wants to "support equality and promote civil rights for every human." If you want to share your story with fellow marchers in the days and hours beforehand, use the hashtag #WhyIMarchNYC.

Start times are staggered to deal with potential crowd control issues, with 16 groups planned to march throughout the day. If you don't think you'll be able to register before Jan. 21, you are free to join Group 16 at 4:00 pm or Group 17 for the grand finale.

However you protest on Saturday, wherever you are, there is one constant that remains true of all of us: we need to be heard.