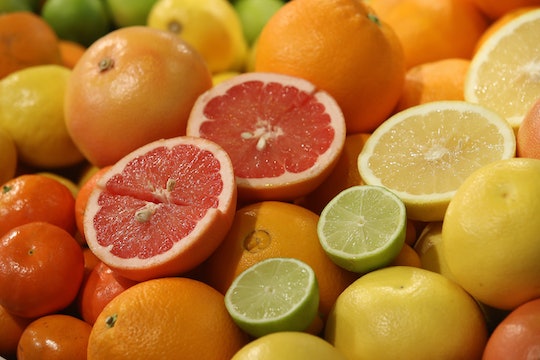 I love grapefruit. It's tart, sweet, and I'm the only person in my house who likes it, so there's always plenty. Rumors about my favorite citrus abound, and I've mostly brushed them off. But recently, this train has picked up steam, and along with it, an entire cottage industry of products that are capitalizing on the trend. The claims are pretty tempting. It's been purported that grapefruits are great for your energy levels, and that it can be harnessed by doing anything from eating them to bathing with grapefruit scented shampoo. But is it true? Does grapefruit give you energy?

The simple answer is that eating a grapefruit energizes you about as much as any other 50-calorie carbohydrate, according to the International Journal of Food and Nutritional Science. As for all of those products full of grapefruit that claim to energize your morning shower? They actually might be onto something. According to research cited by Sleep.org, the smell of citrus "...can boost your body’s production of serotonin, a hormone that makes you feel happy." While happy doesn't necessarily point to wakefulness, according to the research it has also been linked to the reduction of the stress hormone norepinephrine — serotonin's best frenemy, which will help you wake up without being jittery and jumpy.

If, like me, you have been accosted in your DMs by people you barely remember from high school trying to sell you essential oils through their multi-level marketing pyramid scheme, then you've probably already heard "Hey girl, did you know that grapefruit oil can help you lose weight/build energy/clear your skin/defeat the patriarchy?" I'll grant you that it's an attractive idea. There is this notion that you can put your faith in a tiny bottle of condensed oil and hope for the best. (Especially that patriarchy bit. Although clear skin would also be fab.) However, the research isn't great.

I remember vividly going to my first Weight Watchers meeting when I was 20 years old, and being told that the secret to having lasting energy and losing weight was to eat half of a grapefruit first thing in the morning. It was sold as a cure-all for my lethargy and love handles. In the end, I don't think it had any great miracle properties for my weight or energy, but I did develop a passionate love affair with the fruit, and also with salty dogs and Pamplemousse La Croix. I also have been known to use grapefruit scented soap and shampoo, and while I smell fantastic, if I do say so myself, I am a night shower-er, so energy is not what I'm looking for.

Does grapefruit energize you more than other foods? It's complicated. There is some research that shows that it does a better job than other foods at preventing oxidization of the cells, which leads to a healthier body and therefore a body with more energy, but that is fairly abstract. Sure, if your heart is healthy, you're going to have more energy, but it's not like a cup of coffee in the morning. It is just that in being healthy, you're more energetic.

There is also a smaller, but significant study that showed that it might help boost your energy metabolism, and therefore help you lose weight, but again, that's not a shot of espresso. It's a systemic issue that leads to greater energy and eventually feeling energized.

There is also a breadth of research that looks at the olfactory senses and what they provide in the way of focus and energy, as Science Focus reported. However, while your concentration might be improved by the smell of citrus, it's not exactly waking you up, but clearing the fog. Neither one is a direct route for your energy, but they both contribute to being and feeling energized, and that's pretty powerful in the end. Because building a healthy lifestyle is just that — something you build — and grapefruit may just be another brick in the wall. Take the hype about grapefruit giving you energy with a grain of salt, and maybe also with some vodka and ice.