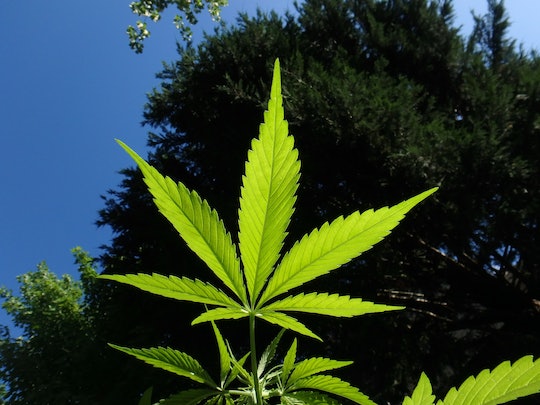 Marijuana has undergone a PR shift in recent years. With increasing legalization and acceptance, what was once deemed the devil's lettuce may to seem so sinful after all. That said, the health concerns about pot are still being studied. For example, does marijuana ruin your fertility? There is not a straightforward answer yet.

There's no denying that marijuana is a popular drug. According to a 2017 Marist Poll, approximately 22 percent of U.S. adults use marijuana from time to time. Of this group, more than half are parents and are more likely to be from the millennial generation. In other words, a large portion of the population uses marijuana regularly and falls into the age range of people who are likely to become parents.

But can pot work against those who are trying to conceive? It's hard to say one way or another with the current information. To gain some insight, Romper spoke to Jamila Vernon, manager of media relations & communications for The American College of Obstetricians and Gynecologists (ACOG). Overall, there appears to be a lack of conclusive studies on the topic of marijuana and fertility, so physicians are left to use their best judgement. Vernon says one member of ACOG, an REI specialist, advises patients who are trying to conceive to abstain from marijuana use. It looks like erring on the side of caution may be a good call.

Additionally, most other medical information does not support the use of marijuana at this time. According to Baby Center, the THC in pot can enter a woman's reproductive organs and adversely affect the sperm's ability to move. Basically, the swimmers won't swim as well and might have trouble making it to the finish line. Marijuana use may also decrease egg quality, as noted by the Advanced Fertility Services. At the risk of sounding like the world's biggest buzzkill, if a person is struggling with fertility, then taking a break from pot may help. Of course, nothing can replace the advice of a physician who is able to take your entire health into account. If anything about conception and marijuana gives you concern, don't hesitate to reach out to your physician for advice.

More Like This
Yes, It’s Possible To Get Pregnant If You Have An IUD
Pelvic Pain During Pregnancy: What Causes It & How To Deal With It
Can You Give A Sleeping Baby A Breathing Treatment? Experts Explain
Here’s Why Your Vagina Itches At Night, According To Experts