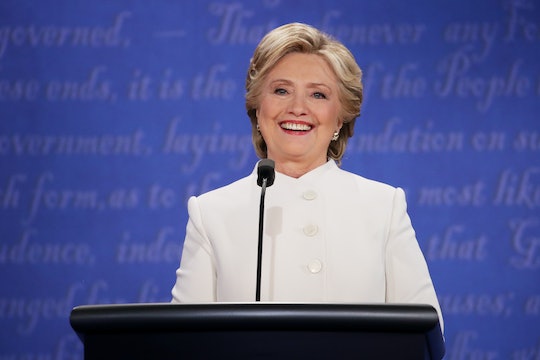 Does The Hidden Message In This Photo Point To A Hillary Presidency? We Can Only Hope

During the presidential debates, the camera captures a lot of things. It captures the candidates' reactions at all times as well as their placement against the debate stage background. During the final presidential debate, a camera pointed at Hillary Clinton captured her at the perfect time against the backdrop. So does the hidden message in this photo point to a Hillary presidency? It's more than likely just a coincidence, but it could possibly be a sign of future success.

During all of the debates, Republican Party presidential candidate Donald Trump and Democratic Party candidate Clinton have stood in front of a backdrop of words. For those sitting at home and watching the debate on their TV screens or iPads or phones, the words might be hard to decipher. Depending on what network people watch the debate on, the angle and cropping of candidates changes from channel to channel.

While it might seem like a bunch of random words strung together, the backdrop is more than that. The candidates are actually standing in front of a copy of the Declaration of Independence. It is very fitting that the candidates stand in front of the words that the founding fathers once wrote — but what it is even more fitting is when the camera captures some of those words behind the candidates.

For one Twitter user, her NBC News broadcast of the debate captured Clinton framed by a backdrop featuring three perfect words over her shoulder: "most likely to govern." This is pretty fitting for the candidate who was leading Trump in the polls by nine points right before the last debate. Therefore, many people believe that Clinton is definitely the candidate most likely to govern our nation come Inauguration Day. Until the results come out on Nov. 8, however, the polls are simply just polls — not results.

As for those words behind Clinton's shoulder — it isn't a Government, media, or Illuminati conspiracy theory. It is simply a camera angle. Clinton was just in the right place at the right time when the photo of her standing in front of the phrase "most likely to govern" was captured. Nothing more and nothing less. While the polls and debate performances might lead to the fact that Clinton is the most likely person to govern our nation, the background words during a debate won't mean a think unless people show up to vote in this 2016 presidential election. While the backdrop might be a prophecy, it won't come true unless people put the trust in their votes and not polling numbers or debate backdrops.

If people want Clinton to be the woman most likely to govern our nation, then they must vote for her for President of the United States.