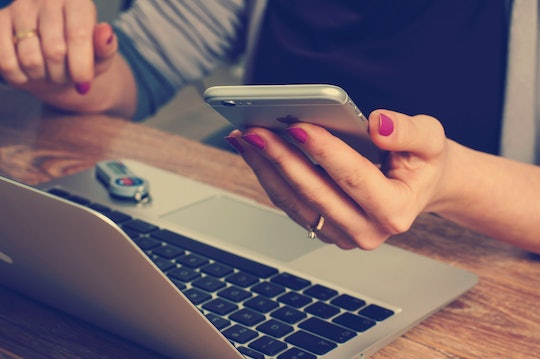 Does Wi-Fi Affect Your Baby In The Womb?

In many ways, modern parents are pioneering uncharted territory as they raise kids in a world quite different than the generations before them. Thankfully, opportunities and advancement abound, giving families more flexibility than ever. But sometimes it feels risky to be unsure of how your use of technology will impact your children. Many expecting parents wonder about the safety of using wi-fi, for example. Does wi-fi affect your baby in the womb? Is it something to avoid whenever possible?

In an article published by New Scientist, David Coggan, professor of occupational and environmental medicine at the University of Southampton UK, said there is likely no cause for concern. "The non-ionising radio frequency radiation through which devices such as mobile phones communicate is of low energy, and as yet no plausible biophysical mechanism has been established by which exposures below internationally recommended limits could cause adverse effects in humans," Coggan explained.

Coggan continued on in the article to point out that this kind of radiation doesn't penetrate tissue well, giving up its energy in the first few centimeters. If you do the math, you realize your baby's brain should be well protected in utero.

According to the American Academy of Family Physicians, the kind of radiation pregnant women should watch out for is ionized. Ionized radiation can interfere with the structure of DNA and molecules during pregnancy. Examples of this kind are things already widely warned against during gestation: X-rays, CT scans, and radiation therapy.

But some experts disagree.

In an interview with SheKnows website, Patricia Wood, executive director of Grassroots Environmental Education insisted that there is simply not enough evidence yet to declare unlimited wi-fi usage safe during pregnancy. "More research is needed to determine exactly how the developing brain is affected, but in the meantime, we certainly have enough evidence of potential harm to recommend taking simple, common-sense precautions," Wood was quoted as saying.

Since wi-fi hasn't been in use long enough to collect airtight scientific data, each family must decide for themselves what they're comfortable with. Some may choose to trust that the risk of negative consequences is low and carry on with their technology as normal, while others may decide they would rather take precaution and live with limited internet access. At the end of the day, it's simply a personal decision.

If you do decide to take a more cautious route, a few of the most prevalent recommendations include keeping your wireless devices several feet away from your body whenever possible and unplugging your router at night. But as it is with so many unknowns, sometimes you just have to make an informed choice and get on to the business of living your life.