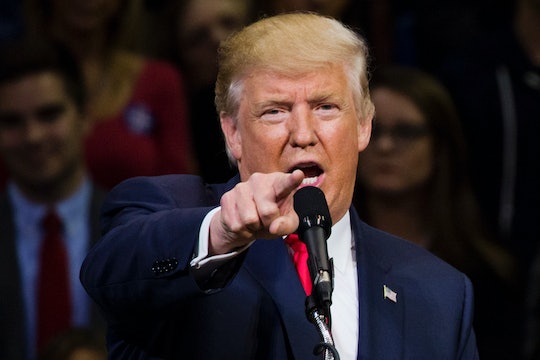 Saving face and scrambling to salvage a floundering campaign, presidential hopeful Donald Trump is pulling out every attack and defense possible. This Monday, Trump reportedly cited illegitimate sources while speaking to crowds in Wilkes-Barre, Pennsylvania. Trump pulled out a sheet of paper and told audiences, "This just came out a little while ago," before proceeding to share a misleading article from the Russian-funded Sputnik News website that alleged that a close Clinton aid had asserted that the attack in Benghazi "was almost certainly preventable" — though, ultimately, the aid never personally said anything of the sort. Donald Trump quoting Russian Wikileaks reports is incredibly dangerous; he's misleading voters with misinformation, presenting ill-researched lies as fact, and overall clouding an election where it's already been increasingly difficult to separate fact from fiction.

Though Trump did technically relay the Benghazi-information as it was published, the Sputnik source itself was highly flawed. Extracting WikiLeaks findings from Clinton election chairman John Podesta, the so-called personal e-mail from Clinton ally Sidney Blumenthal included the following statement: "One important point that has been universally acknowledged by nine previous reports about Benghazi: The attack was almost certainly preventable." From there, "Blumenthal" continued: "Clinton was in charge of the State Department, and it failed to protect U.S. personnel at an American consulate in Libya. If the GOP wants to raise that as a talking point against her, it is legitimate."

These would be truly damning admissions, were they genuinely written by Clinton's camp. As it turns out, though, the original e-mail was simply quoting a Newsweek article entitled "Benghazi Biopsy: A Comprehensive Guide to One of America’s Worst Political Outrages." Journalist Kurt Eichenwald, who wrote the original piece, has since made this fact clear and Sputnik has since pulled the original piece.

In a video from the rally, Trump reads the Blumenthal e-mail, interpreting that the writers were: "Now admitting that they could have done something about Benghazi." Rally attendees then erupted in jeers.

Even though these assertions have been debunked and proven false, Trump has yet to acknowledge that the quotes read aloud were not at all written by Blumenthal. This afternoon, Tump tweeted: "I hope people are looking at the disgraceful behavior of Hillary Clinton as exposed by WikiLeaks. She is unfit to run." Instead of running an opposition based on fact, Trump continues to stick to loose, unfounded allegations in attempts to garner support—even if it means cozying up to foreign governments who could quite possibly be attempting to influence U.S. elections by hacking.