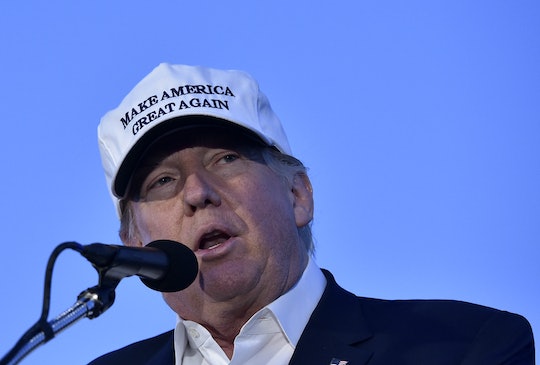 Donald Trump's Reaction To The Chelsea Explosion Was Troubling, To Say The Least

In the aftermath of another apparent attack on New York City, the man who once bragged about owning the tallest building in Manhattan after the Twin Towers fell on 9/11 had something to say. On Saturday night, an explosion in the city's Chelsea neighborhood injured at least 29 people, and the Republican presidential nominee publicly identified a bomb as the cause — without any official confirmation that that was the case. Donald Trump's reaction to the Chelsea explosion showcased an astounding lack of restraint and sound judgment, less than two months before Election Day.

"I must tell you that just before I got off the plane, a bomb went off in New York and nobody knows exactly what’s going on," Trump told a crowd at a rally in Colorado soon after the incident, which occurred at about 8:30 p.m. ET, CBS News reported. Since then, New York City Mayor Bill de Blasio has announced that he believed this was an "intentional act," and New York authorities have removed an explosive device (reportedly a pressure cooker, according to USA Today) from a dumpster blocks from the scene.

But at the time that Trump made his major admission, neither the NYPD or the New York City Fire Department had labeled the cause.

Trump's apparent willingness to prematurely disclose information gleaned during security briefings — he spent 13 minutes on his plane after landing before emerging onto the airport hangar to address the waiting crowd, ostensibly as officials filled him in on what had happened in New York — to fan speculation and push his agenda is stunningly irresponsible. At a time when the threat of a terrorist attack is lodged into most Americans' consciousness, Trump wantonly worked the incomplete story into his speech, decrying "the terrible thing that's going on in our world and in our country."

He followed that up with a vague promise, confirmation that he didn't actually know for certain at the time what had caused the explosion, and his irksome propensity for repeating himself.

This, of course, is hardly the first time that Trump has displayed his inability to handle delicate situations. This is the man who tweeted that he didn't want "congrats for being right on radical Islamic terrorism" right after a gunman murdered 49 people in a gay nightclub in Orlando June 12. He's the same one who called for a ban on Muslim immigration to the United States in response to the devastating ISIS killing spree across Paris last year.

And while those responses are ugly, unnecessarily divisive, and simply childish in their lack of nuance or political finesse, Trump's compulsion to relay information that's sensitive or even classified is perhaps the most troubling. During NBC's live, televised "Commander-in-Chief Forum" earlier in September, Trump talked openly about a classified security briefing he's had a the Republican presidential candidate:

In almost every instance, and I could tell, I'm pretty good with the body language, I could tell. They were not happy. Our leaders did not follow what they were recommending.

These comments didn't risk national security, but they were nonetheless reckless. Classified security briefings and meant to be classified, period. Former CIA director Michael Hayden subsequently told Politico that Trump had crossed a "red line" and that his remarks were "just awful" (not to mention almost certainly false).

While New York Gov. Andrew Cuomo has since called the Manhattan incident "terrorism," he stopped shy of implying that the explosion was the work of international extremists. In a statement to the press on Sunday, Cuomo noted:

Simply put (and given what we know so far), the lack of forethought in Trump's knee-jerk reaction to the Chelsea explosion this weekend, especially when compared to officials' formal reactions to the incident, foreshadow a downright scary situation if he were to secure the presidency.