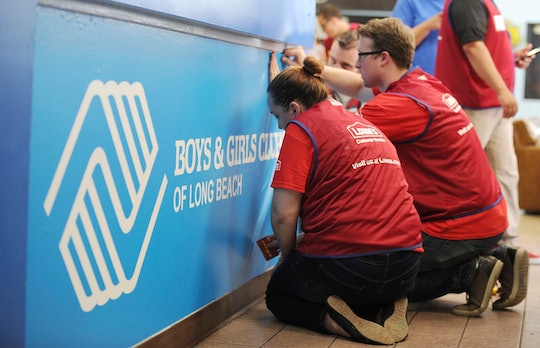 I'm the first to admit that I go hard on Cyber Monday. Last night, I was scoring deals, sipping wine and riding that shopper's high late into the night. But if there's one hashtag holiday that I love more than Cyber Monday, it's #GivingTuesday, the global day of giving back. The holidays are all about spreading love, and that's exactly what Giving Tuesday does. So, if you're wondering where to donate on Giving Tuesday, the Boys and Girls Club of America is a smart choice, for a few reasons.

This Giving Tuesday, Old Navy will triple-match your donation to the Boys and Girls Club of America (BGCA), up to 100,000. This is building on a giving initiative Old Navy began on November 15, in which they pledged to double all donations to the BGCA through December 31 (up to $100,000). But today, the retailer is tripling any donations to the BGCA, and that means that you can really maximize your charitable impact, helping youth in need around the country.

Many philanthropic organizations are competing for donations today, and throughout the holiday season, but in my opinion, you couldn't find a worthier cause to support than the BCGA. The Clubs have been helping underprivileged youth through academic and development programs for more than 100 years, and today they serve 4 million kids and teens, according to a company statement. And the BCGA is certainly making a meaningful difference, as evidenced by jaw-dropping stats like this one: 54 percent of Club alumni said the Club saved their lives, according to BCGA statement citing Harris Survey data.

What's more, BCGA received an impressive 4-star rating from Charity Navigator, a charity evaluator that ranks charities on things like accountability and transparency.

I love that Old Navy teamed up with BGCA to drive Giving Tuesday donations, but this isn't the only noteworthy philanthropic collaboration between the two organizations. For the second year in a row, Old Navy ran a 'One Dolla Holla' sale, where for every pair of $1 cozy socks purchased in-store on Black Friday, they pledged to donate $1 (up to $1 million) to BGCA. Let's just say people were enthusiastic about giving back while stocking up on socks, because Old Navy easily met their $1 million goal, according to a company statement.

It probably didn't hurt that Old Navy pulled in an A-list name to help promote the 'One Dolla Holla' sale. A-Rod, baseball legend and an BGCA-alum, teamed-up with the retail chain to encourage customers to participate in the charitable buying effort, in a sweet “Twas the Night Before Christmas” spoof video.

Then today, Old Navy released another video with A-Rod announcing that Old Navy had reached their $1 million BGCA fundraising goal. The $1 million donation will fund the expansion of a career development program for Club youth, offering them job coaching, mentorship and a first job at Old Navy stores, according to a company statement.

So whether you bought Old Navy socks on Black Friday or plan to participate in Giving Tuesday today, to have Old Navy triple-match your BGCA donation, you'll be paying forward — and that's something to feel merry about.

More Like This
The New Dad In Your Life Will Love These 20 Sweet Valentine's Day Gifts
This Is What New Moms Really Want This Valentine's Day
When Do We Spring Forward In 2023? Mark Your Calendars
30 Messages To Write In A Valentine's Day Card For Your Child
What Parents Are Talking About — Delivered Straight To Your Inbox