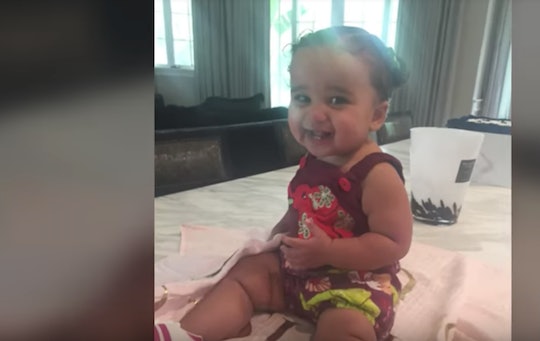 Dream Kardashian Celebrated Her First Birthday With Her Family

Everyone is very aware that a lot has happened in the past year (and that is an understatement). But the Kardashian family has had perhaps one of the most eventful years yet. In the past 365 days, there are been a few pregnancies (some rumored, others real), new business opportunities, and celebrations for their television show, Keeping Up With The Kardashians, being on air for the past 10 years. But there is another thing for the family to celebrate this year — the birthday of Rob Kardashian's daughter, Dream Kardashian. I mean, Dream celebrated her first birthday with a baby car so you already know that her birthday is amazing.

Dream turned a year old on Friday, with a special shoutout from her dad and aunt, Kim Kardashian on Twitter. Her celebration looked super low key from the photos, with balloons that spelled out her name, two gorgeous birthday cakes, and some super sweet presents. Of course, her celebrity aunts — Kim, Khloe Kardashian, and Kylie Jenner — were there to help her celebrate, according to TMZ, along with cousins North West and Penelope Disick.

But for the presents — Dream not only got a Mini Mouse themed baby car but a Mercedes SUV baby car. Just because she won't be able to drive a real car for the next 15 years or so doesn't mean that she can't start getting plenty of practice. In the photos from her party, shared to Rob's Twitter account, Dream looks so happy and like how every little kid should on their first birthday.

It feels like just yesterday Rob and then-fiancé Blac Chyna announced that they were expecting their first child together. In May of 2016, Chyna took to Instagram to announce her pregnancy with a custom pregnancy emoji that said it all. Six months later, Dream was born.

After splitting up this year, according to Us Weekly, and reaching a custody agreement in September to coparent Dream, Rob and Chyna's love that they have for their daughter, especially on her first birthday is so evident. In a super sweet Instagram post, Chyna wished her daughter dressed up in the cutest mermaid costume a happy birthday. "Happy First Birthday Dreamy," Chyna wrote.

Amidst everything surrounding Rob and Chyna, Rob has been all about focusing on his daughter and his love for her over the past few months, Instead of posting photos of himself to his accounts, Rob's Twitter really has been devoted to his love for Dream (I mean, she is his profile picture, after all) and it has been super sweet to watch. But things appear to be reportedly on good terms with Rob and Chyna. According to Radar Online, Chyna is going to throw her own birthday party for Dream this weekend and Rob, along with his mom, Kris Jenner, are both reportedly invited. Double the fun.

Still, what may or may not be going on in Rob and Chyna's personal lives should not take away from Dream's big day. It really has been a big year for Dream herself. I mean, in the past few days, she took her first steps (with the help of a chicken nugget) and got that huge milestone out of the way just in time to celebrate her first birthday. In October, Chyna's Snapchat recorded Dream saying her first word on video — "pumpkin" and got her ears pierced for the first time that same month, according to E! News.

Now that Dream is a year old, it is only the start of more milestones for her to accomplish, and for her parents to capture on camera, in the near future. But it seems like her first birthday has gotten off to a great start, especially with those amazing presents and spending her birthday surrounded by family.

More Like This
Meghan Markle Spent Her Thanksgiving Volunteering For A Cause Close To Her Heart
It’s Britney(‘s Birthday), Bitch!
Kim Kardashian Says She's "Shaken" By Balenciaga's Ad Campaign Featuring Children
Julia Roberts Shared A Rare Photo Of Her Twins Hazel & Finn On Their 18th Birthday