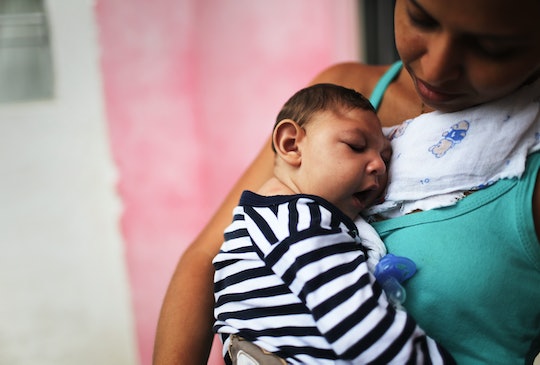 While there is still so much we don't know about the Zika virus, there are a few things we have learned. We've learned that the virus is primarily transmitted by mosquitoes but can also be sexually transmitted by an infected male. We've learned that it is especially dangerous for expectant mothers. But what do we know about the affect Zika might have on small children? Are there any early warning signs that a toddler might have been infected with the Zika virus?

The virus has become a growing concern, especially since the summer months have been closing in on us. Little children are looking forward to lots of outdoor play, splashing around in pools and spending time at the beach building sand castles. Which is sort of terrifying considering these are all places where mosquitoes thrive, the Aedes variety of mosquito in particular. These mosquitoes tend to swarm close to standing water and like the hot weather. So parents are justifiably cautious about letting their children spend loads of time in the great outdoors this year. While the WHO (World Health Organization) has found links between the Zika virus and neurological disorders like microcephaly and Guillane-Barre syndrome, they have yet to report a successful vaccine against the disease.

The good news is that toddlers who have become recently infected with the Zika virus should experience fairly mild symptoms. While a baby who contracts the virus in vitro from their infected mother could suffer from congenital neurological disorders, the WHO reports that small children and toddlers might suffer from general "flu-like" symptoms.

The symptoms are similar to other arbovirus infections such as dengue, and include fever, skin rashes, conjunctivitis, muscle and joint pain, malaise, and headache. These symptoms are usually mild and last for 2-7 days.

The real issue with the Zika virus and toddlers seems to be that scientists have yet to discover how long the incubation time might be. Which means that, by the time a parent sees these flu-like symptoms in their toddler, the virus could well have been in their system for two to seven days.

The treatment for the Zika virus is described as "fairly mild". Since the virus is a strain of dengue fever, patients will want to get plenty of rest and drink lots of fluids. If the symptoms persist after a few days, consulting your doctor would be advisable.

The best way to protect your little one from the Zika virus this summer is mosquito bite prevention. Wear light-colored, long sleeved clothing. Try to use an insect repellent with DEET. Sleep under mosquito nets if at all possible.

Remember that it will still be possible to enjoy the warmer weather with your little one if you take proper precautions. But you might want to keep an eye out for the aforementioned symptoms anyway — just in case.

More Like This
Does The FDA's Plan To Limit Lead In Baby Food Go Far Enough?
New Research Finds Parents’ Mental Health Improved During The Expanded Child Tax Credit
14 Recipes For Sick Kids When Everyone's Tired Of Canned Soup & Crackers
Why Your Vagina Smells Like Fish & What To Do About It
What Parents Are Talking About — Delivered Straight To Your Inbox