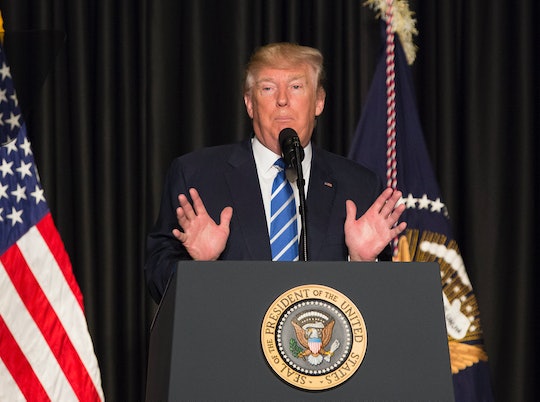 These "Easy D" Trump Memes Will Give You Life

Sometimes, the state of our nation's political and international affairs is just so crazy that all we can do is laugh. And when our current president decides to take to Twitter to air most of his grievances, is it really any surprise that Twitter decides to make the most of it? Not really. These Easy D Donald Trump memes and jokes prove Twitter is having fun with his mistakes. And honestly, thank goodness.

Wednesday, our commander in chief (once again) went on a Twitter rant to talk about "fake news," immigration, the unfair treatment of his daughter, and to (once again) turn himself into a viral meme and joke. This time, though, it's not that Trump is ending his tweets with "sad!" or using all caps to really express his anger, oh no. This time, Trump has tweeted something that has everyone scratching their heads. This time, Trump has ended his tweet with this mysterious statement: "EASY D!" Now, it's unclear just what exactly Trump meant by the sentiment, but Twitter has been having a field day with the phrase.

Our current political landscape is a bit precarious, and with possible threats, protests, and social media arguments taking on a whole new realm, these jokes and memes are just what we need to take it... easy:

It didn't take the internet long to catch on and begin to poke fun at the president's unusual comments either:

Some pointed to the unintentionally hilarious fact that the slip-up and so many other mistakes of late have forced Trump's administration to face questions and topics they probably never expected to face:

Of course, though, a large amount of the tweets poked fun at the obvious innuendo the term "easy d" calls to mind, and especially given the Trump administration's bumpy history with the LGBTQ community, the jokes just kept coming.

Obviously, it wouldn't be a true Trump joke without the mentions of either Putin, DeVos, and Sean Spicer either:

But really, are we that surprised at Trump's most recent tweet? It's been made very clear that Trump doesn't exactly take things lightly when he's insulted, or even proven wrong, so this random verbal lashing, as sudden and angry as it was, isn't exactly shocking. However, perhaps the president should have done a little research and taken a few deep breaths before tweeting this time (and every other time) — a simple Google search could have shown Trump that "easy d" doesn't exactly have a vanilla meaning, after all.

But at least, for now, we'll have these jokes and memes to hold on to, in times of heightened unease amongst Americans.