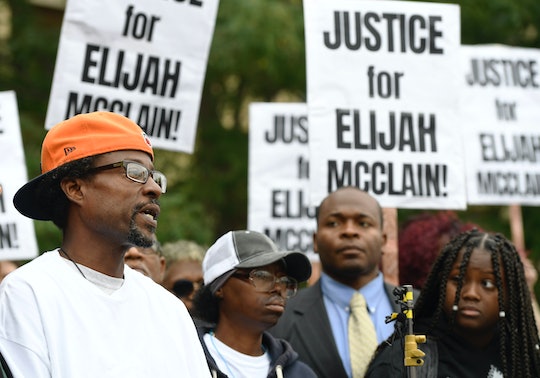 As the one year anniversary of his death approaches, Elijah McClain's parents have sued several Aurora police officers, a paramedic, as well as the Colorado city in an effort "to demand justice" for their son.

On Aug. 11, McClain's parents, Sheneen McClain and Lawayne Mosley, filed a federal civil rights lawsuit against the city of Aurora, Colorado, 13 police officers, a paramedic, and Aurora Fire Rescue's medical director. "Plaintiffs bring this action seeking both accountability for the profound loss of a beautiful soul, and to ensure that Elijah did not die in vain by sending a resounding message that racism and brutality have no place in American law enforcement," his family's lawsuit reads.

McClain, a 23-year-old Black massage therapist and violin player, died on Aug. 24, 2019 after three white police officers restrained him with a now-banned carotid chokehold as he was walking home from a convenience store, according to The New York Times. Someone had called 911 and said that McClain looked "sketchy" while wearing a ski mask and waving his arms, as The New York Times reported. According to the lawsuit, McClain was listening to music on his walk home and enjoying "some iced tea" before officers arrived.

McClain was unarmed and had not committed any crime, as The Cut reported, but police had struggled to handcuff him after one officer claimed he reached for his gun. "I was just going home," the lawsuit claims McClain told officers. "I'm an introvert and I'm different. I just — I'm just different. I'm just different, that's all. That's all I was doing. I have no gun. I don't do that stuff. I don't do any fighting."

Officers used a now-banned carotid control hold to subdue McClain, a tactic that involves applying pressure to the neck to briefly prevent blood flow to the brain, according to Sentinel Colorado. After he was restrained in handcuffs, a medic arrived and sedated him with ketamine, according to the Colorado Sun. McClain suffered from cardiac arrest in the ambulance and died at the hospital three days later after being taken off of life support, according to The Cut.

The lawsuit alleges that police and the city's conduct with McClain is a "part of a larger custom, policy, and practice of racism and brutality, as reflected by its conduct both before and after its murder of Elijah McClain, a young Black man." His family also alleges that police employed "needless use of excessive force and torture" and paramedics injected McClain with a "massive" dose of ketamine that "overwhelmed" his body.

Romper's request for comment from city of Aurora and the Aurora police department regarding the lawsuit were not immediately returned.

McClain's mother told CBS in June that she remembers her son as a determined young man who wanted to make a difference. "I think God that he was my son because just him being born brought life into my world, you know what I mean?" she told the news outlet. "I know he was giving life to other people, too."

The three police officers involved in McClain's death were put on administrative leave, but have since been reinstated, according to The New York Times. Additionally, two officers who posed for photos reenacting a chokehold at the place of his death, and the officer who received the picture, have since been fired, according to the Denver Post. The Colorado Attorney General's office confirmed on Aug. 11 that they had been "investigating patterns and practices of the Aurora Police Department that might deprive individuals of their constitutional rights under state and federal law" for several weeks. This is separate from the independent investigation of McClain's death, which is being conducted by the state.

In an interview with NBC News 9, Aurora Police Chief Vanessa Wilson said that she "welcomes" this investigation. "I think as many eyes as we can [have] look at what we need to do to have change, to rebuild trust, and to move forward as an agency — then I would welcome that," she said. "I'm already in conversations with the Human Rights Commission looking for implicit bias training, looking for all the help I can try and get and move us forward and actually have legitimacy again in our community."

Aurora Mayor Mike Coffman told CBS News in July that McClain's death is "such a horrific incident" and while there is nothing he can say to McClain's family that will make up for their loss, his death will serve as a "catalyst for change."

Sheneen McClain said in an interview with ABC News in June that she will never stop fighting and seeking justice for her son. "Justice to me...is conviction...Like, they need to suffer," she told the news outlet. "Life in prison would be great for me. Honestly, they need to be convicted for what they did because it was unjust... We're gonna keep saying his name. We're gonna shout it even louder every day. All lives can't matter if Black lives don't matter. The revolution is now. Ain't no more waiting for it."