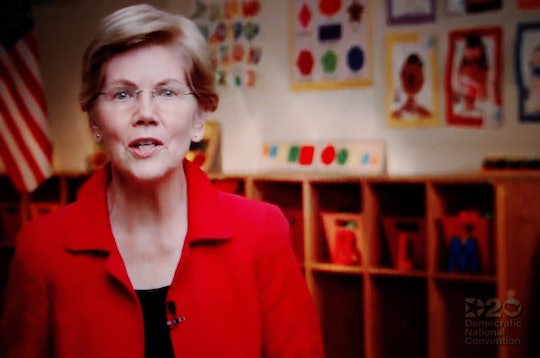 While delivering a powerful speech for the Democratic National Convention on Wednesday, addressing America's desperate need for affordable child care and her support for Joe Biden and Kamala Harris, Sen. Elizabeth Warren also paid tribute to Black Lives Matter. While sitting in a shuttered child care center in Springfield, Massachusetts that she said had been closed for months due to the coronavirus pandemic, the former presidential hopeful spelled out "BLM" with colorful block letters placed inside cubbies.

During Warren's DNC speech, the Massachusetts senator and former public school teacher expressed her support for Biden and Harris, who made history as the first Black and South Asian woman to be nominated for vice president by a major party. "We all need to be in the fight to get Joe and Kamala elected," Warren said. "And after November, we all need to stay in the fight to get big things done."

Warren's address also acknowledged the struggles millions of Americans are going through right now during the COVID-19 pandemic, which she called "Trump’s biggest test" and said that "he failed miserably."

"Today, America has the most COVID deaths in the world and an economic collapse — and both crises are falling hardest on Black and Brown families," Warren said on Wednesday. "Millions out of work. Millions more trapped in cycles of poverty. Millions on the brink of losing their homes. Millions of restaurants and stores hanging by a thread."

As Warren continued to speak, she stood in front of the three block letters that spelled out "BLM," a subtle but powerful nod to the Black Lives Matter movement.

This is not the first time Warren has shown her support for racial equality. In June, for instance, she introduced a bipartisan amendment on Capitol Hill seeking to rename military bases honoring Confederate leaders. "For weeks, all across this nation, Americans have taken to the streets to call for justice and call for an end to the racist violence that has stolen far too many Black lives," Warren said during her speech on the Senate floor earlier this summer. "We say the names of George Floyd and Breonna Taylor and Ahmaud Arbery and Atatiana Jefferson and so many other Black men and women to reaffirm the simple but powerful truth that they mattered. Their lives mattered. Black lives matter."

When Warren offered her support for former Vice President Biden and Sen. Harris sitting in front of three BLM block letters, it was a more subtle nod to the Black Lives Matter movement, but it was important nonetheless.