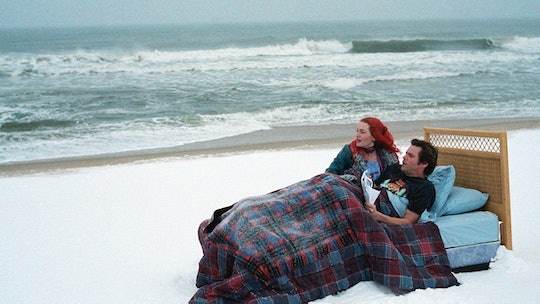 An 'Eternal Sunshine Of The Spotless Mind' TV Show May Happen, So Here's A Wish List

If you've never wanted to wipe memories of some awful SO after a breakup, then you're lying to yourself. Joel Barish (Jim Carrey) and Clementine Kruczynski (Kate Winslet) show us what could happen if you were able to erase a certain someone from your mind in Eternal Sunshine of The Spotless Mind. But now you can see how others react to treatment since the Eternal Sunshine of The Spotless Mind TV show may just happen, according to The Hollywood Reporter.

Anonymous Content's Steve Golin will be remaking the film with studio Universal Cable Productions alongside True Detective executive producer Richard Brown. The TV show will follow the pattern of other big to small screen series in the making like The Departed, The Lost Boys, and Let The Right One In. Presently, there are no details on how the film will be adapted for television, but original director Michel Gondry, and writer Charlie Kaufman, will have no hand in the process.

But, that doesn't mean we can't start dreaming about what this show might look like. Here's what I would want to see go down in the upcoming series.

It will be fascinating to see different people how people handle, and are affected by the "remedy." We've already gotten a taste of a happy ending from the film, so it's possible that the series will explore darker routes, or showcase patients experiencing some interesting side-effects. It could be cool to look into the psychology behind breakups, which just might prevent viewers from going through one themselves. Whatever happens in the series, the heart strings of it's viewers will surely be tugged and twisted, along with their minds.

Personally, my dream cast for the series would star Ellen Page as one of the leads. We've already seen her hooked up to machines, and delve into a dream world in Inception. We've also watched her perform the quirky characteristics of Juno in Juno. Oh, and she has a blatant disregard for what people think about her relationship.

Joseph Gordon-Levitt could also make a great protagonist since he is an expert at going down the rabbit hole in movies like Looper and Inception. I could also see House's Hugh Laurie executing the treatment since he is already reputable for playing a witty, yet insightful doctor.

The show would probably do best if it premiered between New Year's and mid-March, when breakups are most likely to occur.

But no matter who plays in the show, or when it comes out, I think it will make fans reflect on past relationships, possibly inspiring some to reignite old flames, or end them realizing that history only repeats.

I'm just happy this is all fictitious, because I'm the devil and want my exes to remember exactly what they're missing out on.