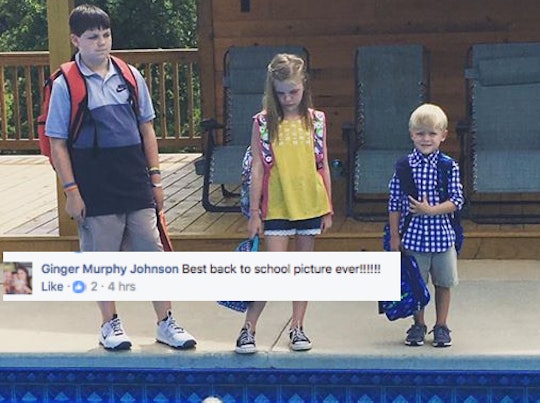 As summer comes to a close and autumn is on the way, families across the country are preparing for the beginning of a new school year. While potentially a time of mourning for children, parents rejoice at the thought of long school days keeping little ones occupied. And to commemorate this magical moment, you have to see this mom's viral back-to-school photo because the anticipation is real.

On her children's first day of school, Jena Willingham of Beulah, Alabama posted a hilarious photo celebrating the changing of the season. Her since-viral photo was taken over the weekend and then posted on Monday morning. It shows Willingham, lounging on a pool float, holding what looks like a mimosa. Her three children — Wrangler, Emmy, and Sykes — stand nearby looking less than amused.

Before Monday's last school bell rang, Willingham's Facebook post had surpassed nearly 5,000 shares. The photo's relatable sentiments are likely the reason why so many people felt inclined to share it to their own pages. It has since gotten over 1,000 likes and hundreds of comments. Her sudden internet superstar status came as quite a shock to the mother-of-three. “I can’t believe it,” she told The Columbus Ledger-Enquirer. “It has been crazy.”

As of this year, all three of Willingham's children are in school. Her oldest, Wrangler, is in the sixth grade, her middle child, Emmy, is in the second grade and her youngest, Sykes, is in pre-K.

Having all three kids in school was reason enough to celebrate. Willingham told the Columbus newspaper:

This is the first time in 11 years that I have not had a kid at home and that’s one of the reasons I did it.

Willingham's photographer and co-conspirator was her husband, Edd. Such shenanigans are not out of place in the Willingham household, so Edd was more than willing to help. “He knows I am always doing something a little crazy,” she said in the same interview.

As many parents know, the best laid plans do not always come to fruition. Unfortunately for this mom, her relaxing day did not turn out to be as relaxing as her photo. She told The Columbus Ledger-Enquirer: “I haven’t even been in the pool. I have been babysitting for my niece.”

As August fades into September, more children across the United States will be packing their backpacks and hitting the books. That means more free time for parents and more hilarious reactions to kids going back to school on the way. Willingham may have missed out on a pool party on Monday, but there are plenty more school days to come.

More Like This
31 Back-To-School Outfit Ideas For Every Kid
Where To Buy School Uniforms, From Jumpers To Dress Socks
These Back-To-School Supplies On Amazon Are Total Wins
18 Cute Notebooks That Make Every Subject Exciting