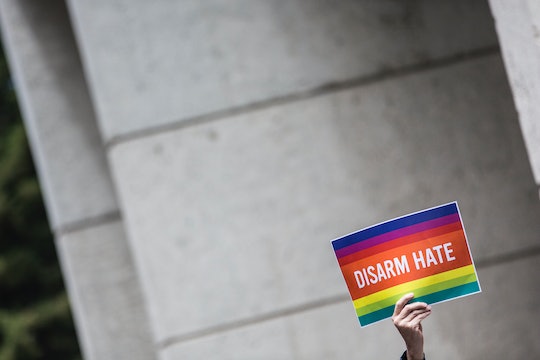 "No Fly, No Buy" is the rallying cry for activists and legislators who want to pass a law that would prohibit anyone on the terrorist watch list from buying a gun. Here's everything you need to know about a terrorism watch list gun law.

Pressure has been mounting in recent weeks following the Orlando Pulse Nightclub mass shooting, the worst in U.S. history, carried out by someone who had been on one of these lists despite the fact that the FBI director confirmed to the New York Times, the shooter had been on a terror watch list. In response to their inability to get a vote on the House floor on new gun legislation, Democrats staged a 25-hour sit-in in the Capitol, demanding House Speaker Paul Ryan hold a vote on increased background checks and a so-called "no fly no buy law." Meaning, if you're deemed too dangerous to board an airliner, as those on the no-fly list are, then you should also be prohibited from buying a gun.

Ryan appeared to be unmoved. But Thursday, on a conference call, according to Bloomberg, Ryan told House members that he will hold a vote on a "terrorism package" that reportedly will include a law that will prevent those with suspected terrorist ties from buying a gun.

And according to Roll Call, the law would make it illegal for about 109,000 people on various watch lists to buy a gun. And a new Quinnipiac poll found 86 percent of respondents supported a "no fly, no buy" law.

Put in simple terms like "no fly, no buy," the bill seems like a no-brainer, but Republicans and gun advocates have some legitimate concerns. For example, Republican are concerned that the terror watch list isn't very accurate in the first place, and that denying fundamental rights to someone just because they've been placed on a list violates their Constitutional rights.

“This list has been faulted for producing a high error rate in the past,” Texas Rep. John Carter said, according to Politico, in an effort to convince his fellow legislators to vote against the measure. “I cannot support a standard that is so inherently subjective, especially when it is used to deny a constitutional right."

But Roll Call reported that only about 3 percent of the 109,000 people on the impacted terrorist watch lists are U.S. citizens, so the number of people whose rights would be impacted would be very small, and those people would be eligible to an expedited appeals process to have their gun rights restored.

Another concern Republicans have is that denying gun rights based solely on "reasonable suspicion" rather than a judge trial violates Americans' Constitutional right to due process. But, the fact that only 3 percent of people on terrorist watch lists are U.S. citizens show that the list might be biased toward people of specific backgrounds or places of origin, which means it might inadvertently deny rights to some groups more than others.

These concerns are also shared by the left-leaning American Civil Liberties Union, which said in a letter to senators about the proposed terror watch list gun law:

...Regulation of firearms and individual gun ownership or use must be consistent with civil liberties principles, such as due process, equal protection, freedom from unlawful searches, and privacy. ...The government contends that it can place Americans on the No Fly List who have never been charged let alone convicted of a crime, on the basis of prediction that they nevertheless pose a threat (which is undefined) of conduct that the government concedes "may or may not occur.” Criteria like these guarantee a high risk of error and it is imperative that the watchlisting system include due process safeguards—which it does not.

So while there is broad public support for restricting those placed on terrorism watch lists from buying guns, it's clear any legislation that passes through the Republican-controlled House will have to protect some very basic American Constitutional principles.

And despite all the bad press they're getting for pushing back on something as seemingly obvious as "no fly, no buy," Republicans should probably get more credit for trying to hammer out a compromise that protects Americans from gunfire as well as government error and overreach.