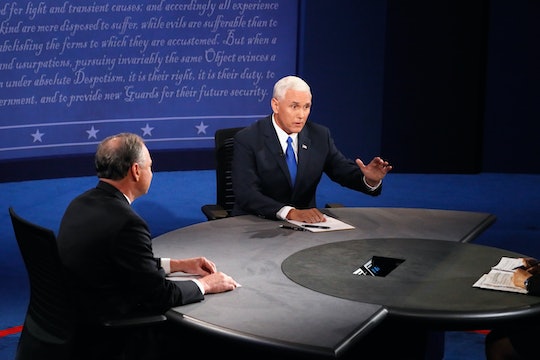 The one and only vice presidential debate was held at Longwood University in Virginia on Tuesday night. Owing to the fact that voters tend not to give vice presidential candidates too much consideration in their vote, the talking points mainly focused on the presidential nominees, with their running mates serving as surrogates. So fact-checking the vice presidential debate mostly consists of repeatedly asking, "Did Trump actually say that?" and "Did Hillary really do that?" than anything about Virginia Sen. Tim Kaine or Indiana Gov. Mike Pence's records.

Tuesday's debate saw Kaine going on the attack, demanding that Pence answer for the words and actions of his running mate, Donald Trump. Pence, in stark contrast to Trump, remained calm and level-headed, but was unable to defend his candidate on most issues. Like any debate, denials, half-truths, and outright deceptive statements abounded, although one side relied more heavily on them than the other. Go ahead and keep count if you like; I'll keep it a surprise. And while nobody will ever agree on who won – even when the winner is glaringly obvious, the loser will still claim to have won – most outlets that are forced to choose a side are going with Pence, based on his demeanor only. Once you get into the actual points, that's a different matter. Now let's check the facts.

"The situation we’re watching hour-by-hour in Syria today, is a result of the failed foreign policy and the weak foreign policy that Hillary Clinton held lead in this administration and created."

False. The Syrian conflict began as an uprising against President Bashar al-Assad. Things first became violent in 2011 when the government arrested and tortured some teenagers accused of spray-painting anti-Assad graffiti, and later opened fire on protesters.

"These guys have praised Vladimir Putin as a great leader."

True. Per CNN, in 2007 Trump said Putin was "doing a great job." In 2011, he said "I respect Putin." In 2013 – I am not joking – Trump invited Putin to "become my new best friend?" In 2015 he said many, many nice things about Putin, but if we're specifically looking for the L-word here, Trump compared Putin to Obama on a December episode of Morning Joe, saying, in part, "at least he's a leader, unlike what we have in this country." As for Pence, he said on CNN just last month, "I think it's inarguable that Vladimir Putin has been a stronger leader in his country than Barack Obama has been in this country."

True. Much like his position on abortion, Trump is constantly flip-flopping on the subject of minimum wage (The Washington Post has a terrific guide). As of publication time, he claims to be in favor of raising the federal minimum wage to $10 per hour, but in November 2015, he did tell Neil Cavuto that he was opposed to raising the minimum wage because "taxes too high, wages too high, we’re not going to be able to compete against the world." In order to earn a living wage, Trump offered this useful tip: "People have to go out, they have to work really hard and have to get into that upper stratum."

Mostly true. Moody’s Analytics concluded that "During [Clinton's] presidency,the economy would create 10.4 million jobs," not 10.5 million, but that's probably just an honest mistake on Kaine's part. Meanwhile, Moody's also said that "By the end of [Trump's] presidency, there are close to 3.5 million fewer jobs," As a bonus, "income will stagnate, and stock prices and real house values will decline."

"Richard Nixon released his tax returns when he was under audit."

True. He wasn't actually running for president at the time (he'd already been elected), but he did release them while under audit, because there's no credible reason not to do so.

"Donald Trump wrote a book and he said Social Security is a Ponzi scheme and privatization would be good for all of us."

True. The America We Deserve by Donald J. Trump and Dave Shiflett is available on Amazon.

"The 330,000 members of the Fraternal Order of Police endorsed Donald Trump to be the next President of the United States of America."

True. Is that a good thing or a bad thing, though? I'd say it depends on whether you're the type to shout "Black live matter" at a protest, or post "Blue lives matter" on Facebook.

"People that came into this country illegally are now involved in criminal enterprise and activity and we don’t have the resources or the will to deport them systematically."

False. Immigrants are actually much less likely to commit crimes, according to at least half a dozen studies.

"With respect to refugees, we want to keep people out if they're dangerous. Donald Trump said keep them out of they’re Muslim. Mike Pence put a program in place to keep them out if they are from Syria."

True. In December 2015, Trump's campaign released a statement "calling for a total and complete shutdown of Muslims entering the United States." Pence has indeed attempted to block Syrian refugees from relocating to Indiana, but a recent federal appeals court upheld an injunction against it.

"Two Syrian refugees were involved in the attack in Paris."

False. They were French, Belgian, and Moroccan.

Mostly true, with a caveat. The U.S. Navy currently has 272 deployable battle ships, which is close to 1916's record low of 245. It is also 100 years later, and we have tanks and planes and drones now. This fact gets trotted out in every debate, according to Politifact, and it's completely meaningless. We also have fewer canons and muskets these days, but nobody's worried about that.

Mostly true. In a town hall event in March, Anderson Cooper asked Trump if he thought those specific countries should have nuclear weapons, and Trump responded, "It’s going to happen anyway. It’s only a question of time. They’re going to start having them or we have to get rid of them entirely." He stopped short of explicitly stating that Saudi Arabia, in particular, "should" have them, but added, "Wouldn’t you rather have Japan, perhaps, they’re over there, they’re very close, they’re very fearful of North Korea, and we’re supposed to protect," which is not really even a sentence.

"More than half of her private meetings when she was Secretary of State were given to major donors of the Clinton Foundation."

False. Trump also misconstrued this Associated Press report, in which it analyzed Clinton's in-person and phone meetings with 154 people who were not federal employees or foreign government representatives. Of those private citizens she met with, 85 of them (or 55 percent) donated money to the Clinton Foundation.

"Less than ten cents on the dollar of the Clinton Foundation has gone to charitable causes."

False. In fact, Charity Watch found that 88 cents of each dollar go directly to charitable causes, with the remaining 12 cents going to overhead. This earns the Clinton Foundation an A rating with the organization. By comparison , the Trump Foundation, which is not a public charity, is currently under investigation.