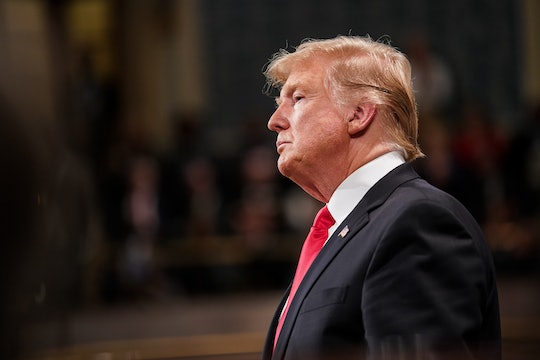 Last night, President Donald Trump gave his long anticipated State of the Union Address. Throughout it, Trump touched on a lot of different subjects, abortion and reproductive rights included. But, it's time to fact-check Trump's SOTU abortion comments, because they were harmful and full of inaccuracies.

Recently, New York passed the Reproductive Health Care Act, which allows women to have an abortion after 24 weeks of pregnancy if her health or life is at risk, or the fetus is not viable, according to CNN. In addition to preserving and expanding access to abortions, the new law removed abortions from the state's criminal code, offering protection for medical practitioners who perform them, CNN reported.

These abortions have come to be labeled as "late-term abortions" across headlines and social media. During his address, Trump cited legislation in New York and Virginia, as reported by U.S. News & World Report, to call on Congress to ban the medical procedure

And on Tuesday night, Trump made numerous references to both abortion and recent legislation that warrant fact-checking.

At one point during his SOTU address, according to The Washington Post, Trump said: "Lawmakers in New York cheered with delight upon the passage of legislation that would allow a baby to be ripped from the mother's womb moments before birth."

However, that isn't what New York state's new abortion law allows. According to the state's own document, the law only allows abortions past 24 weeks of gestation if it's "necessary to protect the patient's life or health" or if there is an "absence of fetal viability".

In other words, the law allows abortions if the patient's life is put into direct danger by continuing pregnancy or if the fetus is not going to survive birth or the remainder of the pregnancy.

According to Quartz, Trump went on to invoke Virginia's governor, Ralph Northam, saying: "These are living, feeling, beautiful babies who will never get the chance to share their love and dreams with the world. And then, we had the case of the governor of Virginia where he basically stated he would execute a baby after birth."

There are two things wrong with this statement. First, as reported by Quartz, Trump is misrepresenting what "late-term" abortions are. In addition, according to U.S. News & World Report, that's not what the governor actually said. During a radio interview, Northam did say he supported state legislation that would allow "late-term" abortions, noting those procedures were usually done if the fetus had severe deformities or wasn't viable.

The president's comment is a misinterpretation of Northam detailing a hypothetical situation, where he said if a woman desired an abortion due to those factors as she was going into labor, the baby would be delivered and "resuscitated if that's what the mother and the family desired. And then a discussion would ensue between doctors and the mother," according to CNN.

A lot of Trump's comments reveal how little he actually knows about what have been called "late-term" abortions. In fact, the term itself is medically inaccurate and lacks clinical meeting, Dr. Barbara Levy, vice president of health policy at the American College of Obstetricians and Gynecologists, told CNN.

"In pregnancy, to be 'late term' means to be past 41 weeks gestation, or past a patient's due date. Abortions do not occur in this time period, so the phrase is contradictory," Dr. Levy told CNN, while also noting the need to use language precisely.

A regular person may be forgiven for misusing "late-term" and what it actually means. But, as president, Trump should be held to a higher standard, especially when giving a national address.

Beyond all that, it's important to point out that there is reason for these procedures, and it's irresponsible to not discuss these in the greater debate surrounding women's health care. "As gynecologist Dr. Jennifer Gunter wrote on Twitter, in her 24 years medical experience and performing abortions, she's never "done one that was not medically indicated" and she "was never approached by any woman to do a non medically indicated abortion."

By perpetuating myths around abortion, Trump puts people directly at risk and compromises their reproductive rights. It is alarmingly that the president would give a State of the Union address with comments like these and, hopefully, members of Congress take note.

More Like This
Can States Ban The Abortion Pill? FDA Rules May Make That Hard
Here’s How To Fight For Abortion Rights
This Map Illustrates Just How Many States Would Ban Abortion If Roe V. Wade Is Overturned
Lauren Conrad Shares Experience With "Lifesaving Reproductive Care" After Ectopic Pregnancy