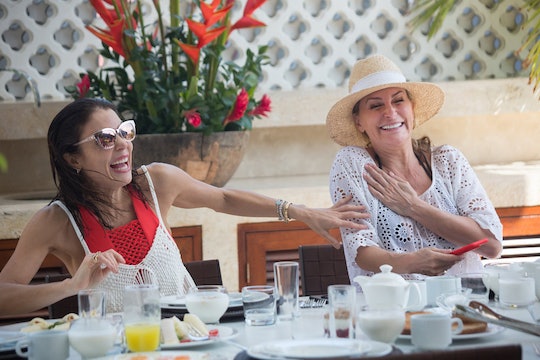 This season of Real Housewives of New York features yet another boating accident, and given the franchise's storied past with this kind of thing, fans think boats are cursed for Real Housewives. Honestly, they may have a point. Remember back in September 2011 when Bethenny got lost at sea on a tiny boat with a film crew, her husband, and her therapist in tow while shooting her RHONY spinoff Bethenny Ever After? Her daughter Brynn was at home and the couple truly thought they were never going to see their child again (even with a therapist on board to temper meltdowns and keep everyone calm!). A rep for Bravo told EW at the time:

It is accurate that Bethenny, Jason and their therapist were stranded at sea when the navigation on their boat broke during a taping for the new season of Bethenny Ever After. The Coast Guard referred a private tow vessel who eventually led their boat out. When people see the episode, they will certainly see for themselves that this was very real.

We saw the incident play out on the show and it genuinely looked scary. Unfortunately, Bethenny relived that terror with her RHONY castmates during their annual girls' trip to Cartagena this season.

The women thought they'd be taking a day trip on a five-star yacht, but the boat ride turned disastrous when they realized the vessel was pretty old and beaten up, according to People. Early reports from Page Six claimed that the ship engine caught fire and the boat started taking on water, with only a few life vests to go around and at least a dozen people on the boat. But Andy Cohen later disputed the report, saying there was no fire, nor was the ship ever in danger of sinking.

The ship's crew reportedly didn't speak English, although we saw Luann speaking Spanish pretty fluently at other points during the trip, so hopefully the Housewives were multilingual enough to communicate. No one appeared to sustain any serious injuries, but Carole and Tinsley reportedly got so seasick from the choppy waters that they were throwing up over the side of the boat, according to People. Page Six also reported that the event was so traumatic that Bravo provided the cast members with counseling following the incident.

RHONY cast members aren't the only ones with bad boat luck, either. In a November 2015 episode of Real Housewives of Atlanta, Cynthia Bailey and Porsha Williams got into such an intense fight while boating with the cast out on Georgia’s Lake Lanier that the typically subdued Cynthia kicked Porsha in the stomach. You know, typical Housewife stuff. The Real Housewives of Beverly Hills also have a bad history with boats. It was on a boat in Amsterdam that Brandi Glanville playfully slapped Lisa Vanderpump in the face and, big surprise, it did not play well. Also on Beverly Hills, while on a boat, Lisa Rinna accused Dorit Kemsley's guests of doing cocaine in the bathroom at her house. Even the newbie 'Wives of Dallas know that boats can be disastrous. In the second season friendships were almost destroyed over a sex toy while the group was on a boat ride.

Maybe it is a curse, but something about Housewives confined to small quarters with cameras filming and no immediate escape definitely makes for reality TV gold.