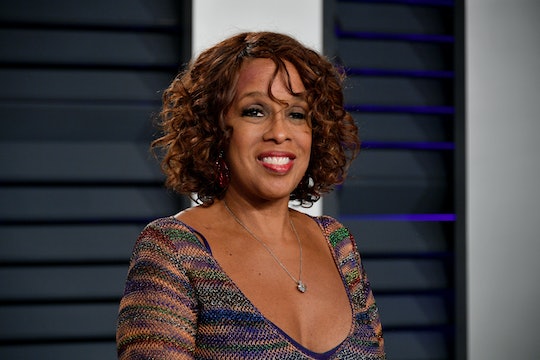 The birth of a royal baby is usually a huge public affair. The public learns when the expectant mother has gone into labor, when the child arrives, and often a photo of the royal baby with his or her mother and father is released shortly thereafter. That was the case with Kate Middleton and Princess Diana but, as reported by ET Online, the Duchess of Sussex has opted for a more private approach with her impending child and she's taken a lot of flack for it. Per the outlet, Gayle King defended Prince Harry and Meghan Markle's choice about their baby's birth, and she has a good point.

King, who attended Markle's baby shower in New York City in February according to the outlet, told ET Online she feels the Duchess is being treated unfairly. She praised Markle as "sweet," adding that the public should focus more on that than the fact that she and Prince Harry want to enjoy a little private time with their son or daughter when the baby arrives. She noted that Prince Harry and Markle are able to do things a bit differently than other royals because of the line of succession, adding that they've broken with tradition from day one and have the freedom to do so. King added that Markle and her husband are "going to be just fine," despite public criticism.

"I think the beauty of what Harry and Meghan can do, because it's highly unlikely he will be king, they can really live a different kind of life," King told the outlet. "They're still part of the royal family, they love being part of the royal family and all that comes with that, but I think it also gives them breathing room for things that aren't traditional. Listen, nothing about their relationship is traditional, and I think that's a great thing."

King added in her interview with ET Online that she's rooting for the couple, suggesting others should be as well. She touted their sweet "love story," adding that with the new baby on the way, the public should be just as excited for them. King told ET she's "psyched" for the newest royal to arrive.

"And this is the thing, who doesn't love a good love story?" King questioned. "Who doesn't love a couple that's in love having their first baby? I'm cheering them both on always, I'm very psyched."

King isn't the only one who's spoken out in support of Prince Harry and Markle's decision to keep the birth of their baby a bit more private that other royals. Oprah Winfrey, King's close friend, also addressed the decision on CBS This Morning. During the interview, according to People, Winfrey said Markle is being treated unfairly by the public, adding that if people really knew her they would know how "graceful and dynamic" she's been in her position within the royal family.

"I think she's being portrayed unfairly, and I feel that if people really knew her they would know that she is not only everything we perceive of her in being graceful and dynamic in holding that position, but she just has a wonderful, warm, giving, loving heart," Winfrey said, according to People. "I think it's very unfair."

Buckingham Palace confirmed that the Duke and Duchess of Sussex would be keeping their firstborn's birth private on Thursday, E! Online reported. In a statement from the palace, obtained by the outlet, they said the couple made a "personal" choice to "celebrate privately as a new family" before sharing news about their new baby. The statement noted that Prince Harry and Markle are "grateful" for the well wishes they have received from fans ahead of their child's birth, and will share news of their son or daughter's arrival when they are ready.

Vanity Fair reported that the Duchess of Sussex will not step out for a photo opportunity with the royal baby after giving birth, which Middleton and Princess Diana both did with their children. According to the magazine, the former actress was "uncomfortable" with the idea. A palace source told Vanity Fair Markle and Prince Harry will likely share a photo with their baby within a few days of his or her birth.

"It will probably be within a few days of the birth, but there is no time limit," the insider told Vanity Fair. "It will depend on how the birth goes and how the Duchess is feeling."

Per People, there will be an announcement when Markle goes into labor and another when the child is born. Fans shouldn't expect much more information than that at first, however.

Town and Country reported that Markle is due to go into labor any day now, so be on the look out for an announcement from the royal family about that. In the meantime, here's hoping Prince Harry and Markle are enjoying their final days as a twosome and the baby makes its arrival happily and in good health.

More Like This
Alec & Hilaria Baldwin Welcome Baby #7, And Revealed Her Cheerful Name
27 Sweet & Strong Boy Names That Start With “S”
Are You Leaking Amniotic Fluid Or Is It Normal Discharge? Experts Explain
25 Baby Girl Names That Begin With D