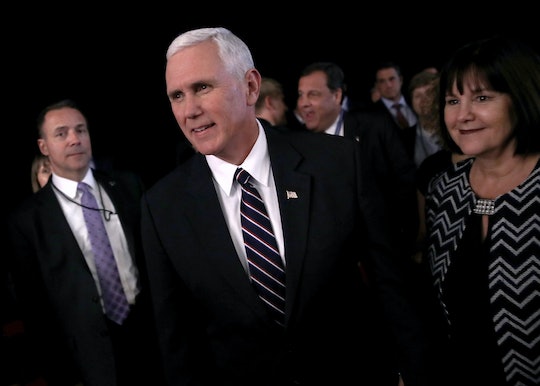 It's always important to be optimistic for a big event like the vice presidential debate, but sometimes an overeager press secretary or communications director gets ahead of themselves. Like on Tuesday afternoon, when the GOP declared Mike Pence winner of the debate hours before it even began. In a blog post that has since been taken down, the GOP praised Pence for his debate performance and even gave some hints as to what he was planning on talking about. The organization called Pence the "clear winner" and said that he made the most of the opportunity to debate Pence and that he "perfectly shared Trump's vision to make America great again."

More Like This
If Your Kid Can’t Get Enough Dinosaurs, They’ll Love These 20 Shows
Meghan Markle's "Raising The Future" T-Shirt Has A Cute Connection To Archie
Obama Said The Sweetest Thing About His “Friend” & Family Dog Bo
15 Of JAY-Z’s Best Quotes On Parenting

The GOP also said that the other winner of the night was, obviously, Republican nominee Donald Trump. Of course, it was just a mistake — it's common for people in Washington to get a little ahead of themselves during big events and want to plan ahead so that they can get a piece out before anyone else. But the fact that they went all in so quickly, and so effusively, shows that when it comes to politics, maybe no one is listening to anyone else, ever. It's sort of sad.

Obviously, it would be weird for the GOP to not declare its candidates winners after the debates, but without even hearing what Virginia Sen. Tim Kaine has to say and giving Pence yuuuge props no matter what is the crux of the problem when it comes to partisan politics. Wouldn't it be great if politicians and their parties could admit faults or say, "oh, that's an interesting idea," or even just admit when their candidates do a bad job? I mean, what if Pence, say, accidentally wets his pants under pressure (there are no commercial breaks, it could happen). Would we say he was a "clear winner?" I think not.

Also, when it comes to the GOP and the Trump campaign, admitting fault is not something they usually do. There have been numerous times where the top of the ticket candidate has put his foot in his mouth and Pence, and other surrogates, spin it into a positive. Actually, now that that I think about it, if Pence peed his pants on stage, they would probably say it was a sign of bravery. (And it would be.)

At least they took it down as a way to acknowledge the mistake — and we all know for sure now that everyone is just shouting over each other anyway. Maybe no one even noticed. (But they probably did.)