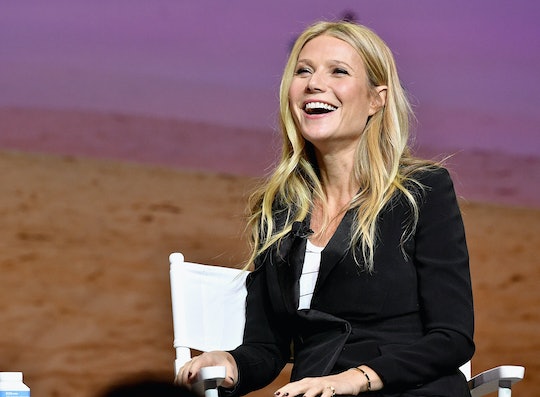 Gwyneth Paltrow's Election Comments Are Totally Privileged & Out Of Touch

Sometimes it might be better for celebs to keep their mouths shut about current events, especially when they really just don't get what "regular" people go through on a daily basis. Like Gwyneth Paltrow's election comments, which prove that she is totally out of touch with reality and her own privilege. Over the weekend, Paltrow spoke at the Airbnb Open conference in Los Angeles and said, "It’s such an exciting time to be an American because we are at this amazing inflection point."

She added, "People are clearly tired of the status quo, and … it’s sort of like someone threw it all in the air and we’re going to see how it all lands. It’s very important for me, personally, now more than ever, to create a community and to remember the humanity of everybody and to create love and … understanding.”

As a longtime Democratic donor, let's just assume that Paltrow had good intentions when she said that she's looking forward to see where everything "lands" throughout a Trump administration.

But it's hard to decipher those good intentions when her comments just sound totally tone deaf. The LGBTQ community, people of color, women, Muslims, and their allies are terrified of what the next four years will bring. Hearing someone who has the kind of wealth and platform like Paltrow call it "exciting" doesn't make anyone feel better. Or change anything, which might be the worst part. It's sort of insulting.

She added that the election made her check her empathy levels. "I really need to open my mind and understand better because I don’t," Paltrow said. Oh, Gwyneth, no, you really do not get it. Paltrow is often chided for having her head in the clouds and being out of touch, and when she says things like this it really proves her detractors point.

Most recently, she spoke about how hard it was to be a "working mother" and once did an experiment where she tried to live off of "food stamps" and bought things like cilantro and more than a half a dozen limes. “As I suspected, we only made it through about four days, when I personally broke and had some chicken and fresh vegetables," she wrote on Goop at the time.

Paltrow also just released her annual gift guide from her lifestyle company, Goop, and it includes a home sauna, chocolate toothpaste, and a thousand dollar yurt. (It's OK, I had to look it up, too.) Most Americans are worried about their mortgage rates, their dental insurance if Trump messes with the Affordable Care Act, and generally pretty broke, for perspective.

If she want to make a change, Paltrow might want to clue in first. At a time when the country is at an "inflection point," as the actress so aptly put it, it would sure be nice if celebs could put their money and platform to good use, like actually defending marginalized Americans.

It's worth noting that although Paltrow threw a few fundraisers for President Obama, Hillary Clinton's campaign didn't allow her to throw one that the candidate would attend. It was probably good judgement on Clinton's part to not associate herself with the kind of privilege Paltrow sells. Clinton attended her fair share of fancy parties, for sure, but at least she wasn't seen with someone who recommends vaginal steaming as a necessary hygienic routine.

No matter what happens under a Trump administration, celebs like Paltrow will be just fine, which is why it's so grating to hear them be "excited" about what's to come. Many celebs have expressed outrage at the election results, but unless they walk the walk (and not just post selfies with "I'm With Her" pins), their opinions are as useless as chocolate toothpaste.