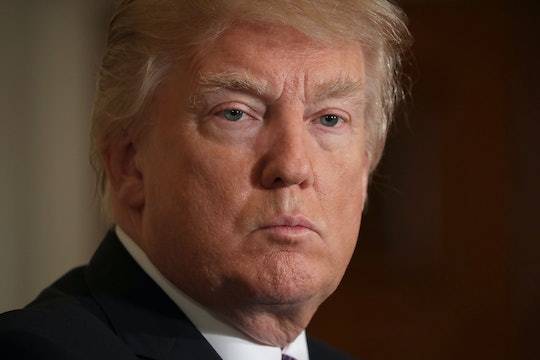 Has The US Declared War On Afghanistan?

The United States dropped a 22,000-pound bomb on an ISIS cave complex in Afghanistan on Thursday afternoon, ABC News reported. The bomb is the largest non-nuclear weapon that the U.S. military has, and it was the first time it has ever been used. Has the U.S. declared war on Afghanistan? The bomb, nicknamed the "mother of all bombs," could signal the United States's intentions, though no clear declaration has been made.

The bomb is a GBU-43/B Massive Ordnance Air Blast Bomb, sometimes called MOAB or the "mother of all bombs," according to CNN. Military sources reported it was dropped by the Air Force Special Operations Command, via an MC-130 aircraft. The military is still assessing the damage.

Shortly after the news broke, Press Secretary Sean Spicer gave a press conference, saying that "The U.S. takes the fight against ISIS very seriously," and reported that dropping the bomb was meant to remove one of ISIS' primary operational spaces in Afghanistan. Spicer also repeated what the Pentagon said in its statement: that the U.S. "took every precaution to avoid civilian casualties with this strike", according to CBS News.

The MOAB was designed during the Iraq War, and the military reportedly has been planning the drop for several months. The commander of U.S. forces in Afghanistan, General John Nicholson, received the OK to go ahead with the mission from President Trump directly, according to a military spokesperson, as reported by The Hill. Spicer refused to confirm in Thursday's press briefing, referring the reporter who asked to the Department of Defense.

The U.S. went to war with Afghanistan in 2001, after the September 11 attacks with the intention of going after al-Qaeda and removing the Taliban from power. In May of 2014, after more than a decade of war, President Obama called for troops to be removed from Afghanistan, according to the Council on Foreign Affairs. Over the course of the next few years, troops were not ultimately withdrawn in total and prior to the end of his presidency, Obama announced that around 8,400 U.S. troops would remain in the country through 2017, according to U.S. News. "Nevertheless, the security situation in Afghanistan remains precarious," Obama said at the time of the decision, which was a departure from his original intent, "Even as they improve, the Afghan security forces are not as strong as they need to be."

Last year, a military official further summed up the justification for leaving troops in Afghanistan, telling the Washington Post:

What we’ve learned is that you can’t really leave. The local forces need air support, intelligence and help with logistics. They are not going to be ready in three years or five years. You have to be there for a very long time.

It begs the question: did the U.S. war with Afghanistan ever really end? Whether or not it, the U.S. presence in the country — paired with the latest military action — could either restart or revive a conflict that perhaps was never really over, only dormant.