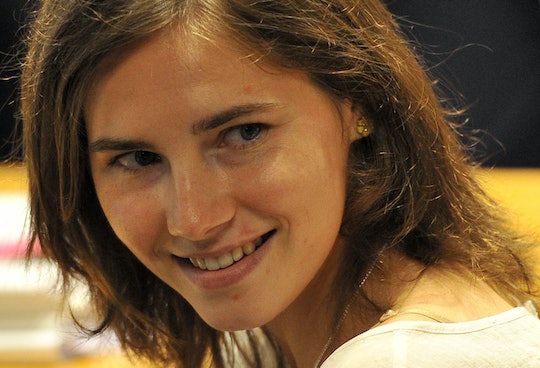 The new Netflix documentary Amanda Knox is set to release online soon, but the film actually had its debut at the Toronto International Film Festival, with Knox, herself, in attendance, alongside her new boyfriend, Christopher Robinson. Unlike other recent true crime docu-series, which aim to uncover new facts or to "solve" cases, Amanda Knox opens with the Italian Supreme Court's 2015 decision to definitively exonerate Knox and her boyfriend at the time of the murder, Raffaele Sollecito, of any guilt in the murder of Amanda's study abroad roommate, British student Meredith Kercher. Headlines about Amanda Knox during the trial, rather than her guilt or innocence, subsequently became the focus for filmmakers Brian McGinn and Rod Blackhurst.

The case received international tabloid attention with particularly salacious headlines in a trial that captivated the whole world. McGinn pointed out in an interview with The Verge that the story was "a sensation" not only in the US, but also in the UK, Italy, Europe, and Singapore, "and that actually made it a larger story than a traditional lurid tale lifted from the tabloids." The sexual assault and brutal murder of a British study abroad student, allegedly by her American roommate, her roommate's lover, and a third party with a previous romantic connection to her helped the prosecution build a case about a drug-fueled sex game among college co-eds that turned deadly.

Add to the mix paparazzi images of Knox and Sollecito kissing just hours after they had discovered the body, Amanda's childhood nickname of "foxy Knoxy," and the fact that the first reporters on the ground in the small Italian town were freelance tabloid journalists, controlling the story as it funneled out to other, larger, and more legitimate media outlets, and the recipe for Knox's portrayal negative portrayal was complete. When asked what gave this particular trial international headline appeal, McGinn said:

"It’s relatively straightforward and [tabloid journalist] Nick Pisa says it in the film: it happens in a beautiful, picturesque Italian town, and all over the world, we have a romantic idea of what Italy is. Then you have people from all over the world. The victim is British, Amanda is American, her boyfriend is Italian — so you have three countries, two of which are [some of the] biggest media-driven countries in the world. So it just became a hail storm. Then it turned into these countries making it a battle between themselves. [Then] people become forgotten, the facts get neglected, and it all turns into a big cloud of mystery."

The film aims to take a look at the people behind the headline caricatures, hosting intimate interviews with Knox, Sollecito, Pisa, and others involved with the case. You can see how successful they were on Friday, Sept. 30th, when Amanda Knox goes live on Netflix.