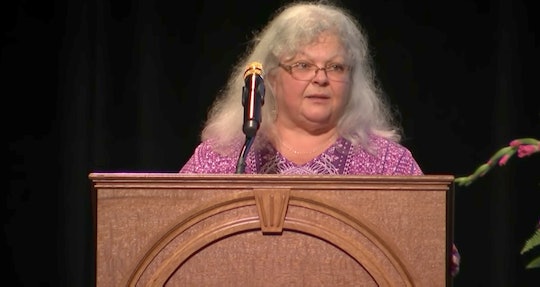 Susan Bro, who is the mother of Charlottesville protestor Heather Heyer, said she won't speak with Donald Trump following her daughter's death. Heyer was tragically killed after a man who was allegedly a white supremacist drove his car into peaceful counter protesters in Charlottesville, Virginia on Saturday, Aug. 12. Bro said on Friday on ABC's Good Morning America that she has no interest in speaking with Trump, "after what he said about my child," according to CNN.

Trump said on Tuesday that when it came to the events in Charlottesville, "I think there is blame on both sides and I have no doubt about it," according to Reuters. He then added that there were "very fine people" on both sides. These comments drew sharp criticism from people who felt Trump equated the counter protesters with neo-Nazis, and one of those people is Bro. Many people also found it pretty disturbing that Trump thinks there are "fine people" among neo-Nazis an white supremacists.

CNN reported that Bro is not interested in speaking with Trump after she felt he compared her daughter and her daughter's actions to the actions of white supremacists. On Good Morning America, Bro said:

I'm not talking to the President now. I'm sorry. After what he said about my child, and it's not that I saw somebody else's tweets about him. I saw an actual clip of him at a press conference equating the protesters like Ms. (Heather) Heyer with the KKK and the white supremacists.

At the end of the clip featured above, Bro had very strong words for Trump following the remarks he's made in the days since Charlottesville. Specifically, Bro said:

You can't wash this one away by shaking my hand and saying 'I'm sorry.' I'm not forgiving for that.

Bro's comments on Friday were a little different from what she has previously said about Trump. On Monday, after Trump spoke against hate groups for their role in the violence in Charlottesville, according to The Hill, Bro said:

Thank you, President Trump, for those words of comfort and for denouncing those who promote violence and hatred.

But that was before Tuesday, when Trump defended and reiterated his "both sides" comments about the tragedy in a press conference held at Trump Tower, according to The Independent. Those comments are likely what made Bro decide not to speak with Trump after all.

According to ABC News, Bro said that she has received some messages from the White House since her daughter's death, and that she believes the first phone call came to her during her daughter’s funeral on Wednesday. She didn't initially return those messages because she was busy with the memorial arrangements, Bro admitted. But now, she has no intention of returning those calls, as a direct result of Trump's recent comments about Charlottesville.

These are not the first comments from Bro that have sparked national attention. According to ABC News, on Thursday, Bro also made a point about how her daughter's choice to protest wasn't extraordinary, but instead one that everyone should make. Bro said of her daughter:

I'm honestly a little embarrassed to say that part of the reason Heather got so much attention is because she's white, and she stood up for black people. Isn't that a shame? That a white person standing up for a black person caused all this excitement? That should be an everyday thing, that should be a norm.

In the wake of her daughter's death, PEOPLE reported that Bro is committing herself to “Heather’s mission.” And with the strength and resilience she has shown since Heyer died, whatever Bro chooses to do next to honor her daughter will definitely be something to see.