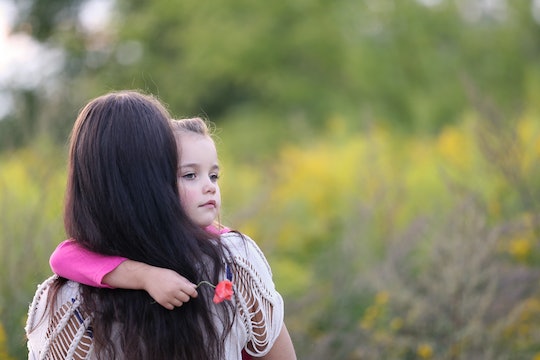 With Congress set to take up federal budget approval this fall, analysts are continuing to unpack the potential good and harm in the slate of cuts in President Donald Trump’s budget plan. Released by the White House last spring, Trump’s proposal slashes nearly $4.3 trillion in non-defense discretionary spending over the next 10 years — and includes severe cuts to Medicaid, children’s health insurance programs, welfare spending, and other programs that could prove dangerous for thousands — if not millions — of women and children. But if that weren’t awful enough, the proposed budget would completely eliminate a program designed to improve the chances of success for teen girls. Here’s how Trump’s budget will specifically hurt girls, should it come to pass.

When Trump unveiled his plan for the federal budget, much attention went to its dramatic attempt to scale back, or even eliminate, certain federal agencies. But tucked within those larger targets was a small, but important program started under President Barack Obama to promote comprehensive sex education for teens, and scale up the most effective teen pregnancy prevention programs. The Trump administration has already started cutting back funding for the Teen Pregnancy Prevention Program, The New York Times reported. If the president’s budget is enacted as written, the program could go away entirely, putting a full stop to proving which prevention strategies actually help teen girls avoid unintended pregnancy, according to that report.

Teen births and pregnancies in the U.S. have been on a steady decline over the last 25 years, according to a Guttmacher Institute report, and have reached historic lows over the past decade. But one of the challenges for health officials has been pinpointing the factors and interventions behind the decline. The Times reported that greater availability of birth control, more sex education in schools, a cultural shift towards more conversations about sex at home, and a trend toward women having babies later in life in general have all been touted by researchers as important drivers behind the nation’s drop in teen pregnancy. But no rigorous study has identified the mix of approaches and behaviors that can predictably lead to lower teen births, according to the Guttmacher report.

That’s what the Obama program was meant to help address, mainly through independent evaluation of more than 100 sex education and health programs, according to the official website. The studies (funded by five-year grants from the Department of Health and Human Services) were already beginning to offer evidence explaining why certain programs fared better than others, the Times reported. Some projects that did well in some communities but failed in others did so because the teachers and teens made for “a different context,” one policy researcher told the Times. Others, citing mixed evidence about whether long-term birth control reduces teen pregnancy, said that the early findings meant that the federal government should be funding more research not less.

Jon Baron, vice president of evidence-based policy at the Laura and John Arnold Foundation, told the Times that cutting pregnancy prevention research funding at this point is like “cutting medical research because the vast majority of approaches, interventions, and treatments that are tried are proven not to work.” It’s not exactly the path to a research breakthrough, in other words.

So far, more than 20 health commissioners from major cities have protested Trump’s budget cuts. But in a Congress stacked with conservatives wedded to the widely disproven notion that abstinence-only education works for teens — with other, major agency reductions at stake — there’s more than enough reason to worry that girls will be worse off if this budget passes. If enacted, Trump’s plan could leave millions of teen girls who need comprehensive sex education and access to birth control in a far worse position than they deserve to be. And it could certainly affect the ability of young girls growing up now to get the sex education they need as they age.

More Like This
Banana Boat Sunscreen Has Recalled Products That Were Found To Contain Benzene
New York Can End Religious Exemptions to Vaccine Mandates, Says A Federal Appeals Court
A New 'Golden Girls' Themed Restaurant Is Happening!
Nebraska Authorities Used Teen’s Facebook DMs To Charge Her & Her Mom In An Abortion Case