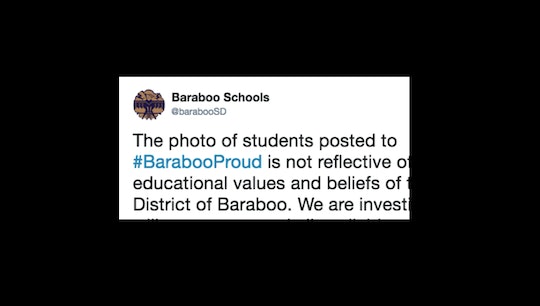 On Monday morning, a photo emerged on social media showing a large group of teenagers, reportedly from Baraboo High School in Wisconsin, who appeared to give a Sieg Heil salute as part of their prom photo shoot, according to multiple news reports. Following a wave of backlash and outrage, high school administrators have condemned the viral photo of students purportedly holding up Nazi salutes in statements posted to social media.

Romper has reached out to Baraboo School District Superintendent Dr. Lori Mueller for further comment on the photo, but did not hear back in time for publication.

The photo in question went viral early Monday morning, according to The Baraboo News Republic. It shows a group of mostly white male students in gray or black tuxedoes throwing up the "Sieg Heil" salute, and many of the young men are seen smiling or laughing in the photo. "Seig Heil," translated roughly to "Hail Victory," is the German greeting used during the Nazi era and is considered a symbol of extreme hate, according to the Anti-Defamation League.

In response to the photo, Mueller, tweeted on Monday morning that the photo is "not reflective of the educational values and beliefs" of the city school district. A similar message was posted to the Baraboo School District's Twitter account.

The Baraboo School District also sent a letter to parents on Monday morning addressing the derogatory photo, which was reportedly taken for the class of 2019's junior prom, and confirmed that it wasn't taken on school property or during a school-sponsored event, according to The Washington Post. The district wrote in its letter, "If the gesture is what it appears to be, the district will pursue any and all available and appropriate actions, including legal, to address the issue."

With that, we want to very clear: the Baraboo School District is a hate-free environment where all people, regardless of race, color, religion, creed, sex, sexual orientation, gender identity, national origin or ancestry, are respected and celebrated.

The anti-Semitic photo quickly sparked outrage across social media, with many people calling the image "racist" and "hate-filled." Wisconsin State Sen. Jon Erpenbach told The Baraboo News Republic the rhetoric coming out of the Trump administration, in light of recent hate crimes, has "set a bad example." Erpenbach told The News Republic:

There is no place for hatred, intolerance and racism in our society. Unfortunately, based on what these students see coming from the White House, some of them may believe what they have done is acceptable. It is absolutely not. Leaders, from the President on down, need to condemn racism in all its forms and work toward a world where we learn from the mistakes of history.

The Auschwitz-Birkenau Memorial and Museum also took to Twitter to condemn the offensive photo, and share online lesson plans that explain "what can be the extreme result of normalization of hatred."

The school district did not confirm to NBC 15 if the teenagers are enrolled in Baraboo High School.

Since the photo went viral, people who have claimed to be Baraboo High School students have revealed experiences of racism, sexism, prejudice, and bullying at the school, some of which journalist Jules Suzdaltsev, who first broke the story, shared to his Twitter timeline. According to some of the teenagers who've reached out to Suzdaltsev, school district administrators allegedly ignored or dismissed the reports.

Wheel Memories, a local photographer, removed the image from the BHS Prom Pic's page of the its website "due to malevolent behavior," and posted a statement in response to the outrage surrounding the photo. The statement read, in part:

It is too bad that there are those in society who can and do take the time to be jerks; knowingly and willingly to be jerks! The internet can be a wonderful tool but for some there is an overwhelming urge to destroy. The destruction may not be physical but instead it can be bullying that is intellectual or emotional. To anyone that was hurt I sincerely apologize. ... To those who have harmed them, we as society often ignore them I have chosen not to do that. YOU ARE JERKS! Grow up!